Weather-torn walls are crumbling from years of being exposed to the elements. There is rubble lying on the littered ground. One innocent banner gently waves in the breeze, a message of love taken as an act of terrorism.

It sounds like a bombed building in the Middle East, but it’s actually in Lubbock. Decades of grueling wars in the Middle East have negatively impacted those of the Muslim faith. Middle Easterners and Muslims alike have been unjustly recognized for acts of terrorism around the world.

“A lot of people have these stereotypes about the Muslim culture and Muslim families,” said Kyle Holub, an art student at South Plains College.  “I kind of grew up with thinking Muslim people are terrorists, because that’s all you see in the news. I don’t like that people thought like that.”

Earlier this year, Holub decided he wanted to challenge these stereotypes in a very extreme way. So he hung a large, black banner across the 11th story of the Citizens Tower on 14th Street in Lubbock on Feb. 16. This banner had a large heart in the background with an Arabic phrase written across it stating “love for everyone.”

“What I really wanted is like a process,” Holub told the Plainsman Press in a recent interview. “You see the banner and you automatically think something, and most of the time it’s going to be the connotations we have. And I wanted them to see that and then find out what it means, and they’re like ‘Oh, I kind of feel biased for assuming that.’”

And with one piece of street art, they made assumptions aplenty.

Since the banner was hung on the highest part of Citizens Tower, it could be easily seen from the freeway, which led to the majority of Lubbock discovering it fairly quickly.

“Visually, [the building] looks like it came straight out of Baghdad, so I thought it was an awesome backdrop,” Holub said. “I was looking at the building as I was driving by and could see it from the freeway, which is how I got the idea to hang it there. It was also the tallest building I could get into.”

After finishing his street art with the aid of local homeless man Richard Green, Holub quickly realized the possible consequences of what he had done.

“Initially, I was a bit scared, because I didn’t know what was going to happen,” Holub said. “I was like ‘Oh, what are the feds gonna think, you know?’ And then I was thinking like, ‘Oh, I didn’t really do that much wrong.’ But still I told everyone to kinda be quiet about it. I really was hoping not to get caught.” 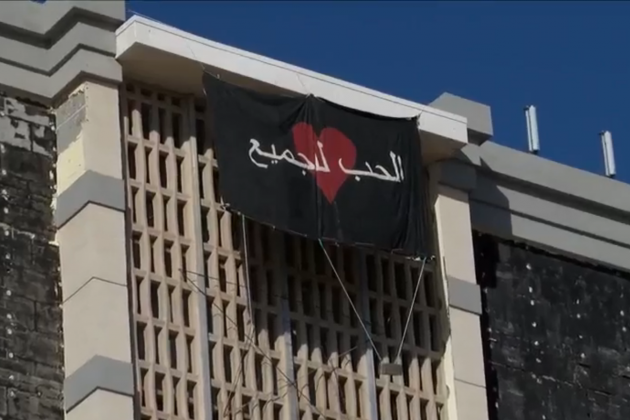 Not long after the banner was hung, the people of Lubbock were in a social media frenzy about what the banner could mean. Many assumed it was a terroristic threat. It was quickly reported by local, national and international news outlets about the Arabic banner hung in the small West Texas town of Lubbock.

“I knew that if it didn’t make national news, I was going to consider it a failure,” Holub said. “I knew what was going to happen, and I figured what they could get me for, but I wasn’t as careful as I could have been. I didn’t realize they were going to investigate as hard as they did.”

Considering the Arabic phrase on the banner, Glen Robertson, the mayor of Lubbock, did not want to risk the chance of a terrorist in Lubbock, so he immediately called for Homeland Security and the FBI to intervene in the matter.

“I didn’t expect the mayor to call [the FBI],” Holub said. “But that was perfect, because that’s what I was trying to prove. It’s sad, because that’s the place he’s making decisions from, and he’s in a position of power. But I think without his reaction, it wouldn’t have blown up as big as it did.”

Once officials consulted with an expert in Arabic language, they quickly found that the Arabic phrase was not meant to be a threat, but instead a message of love, proving Holub’s point.

“People are going to think of Muslim people when they see the language,” Holub said. “The phrase was just to kinda try to get people to change their ideas. ‘Love for everyone.’ That’s the way it translates from the Arabic.”

Though the banner did not pose a threat, city officials still wished to seek out those responsible for the illegal street art.

For two days, Holub believed he had gotten away with it. But he soon realized after leaving campus one afternoon that was not the case.

“As soon as I got into Lubbock County, there was like five cops behind me,” Hollub recalls. “They were all flashing their lights, so I pulled over, and the guy came up to my window and was like, ‘Hey, we have a warrant for your arrest. Are you Kyle Holub?’ and I said, “Yep, so they got me out of the car.”

Next, the police searched his car, looking for anything which may be used as evidence, and anything alluding to him being the terrorist many assumed him to be.

“It was kinda funny,” Hollub says in retrospect. “My car was a mess; the worst it’s ever been. They were looking through it and picking up art supplies, showing them to each other and just kinda scratching their heads like, ‘These aren’t terrorist supplies.’”

He was then driven downtown to police headquarters to talk to investigators and get the situation figured out. Once that was complete, he served 12 hours in jail before being released. Then he was allowed to pick up his car from impound and return to his classes at SPC.

“Going to trial is kind of expensive, so I just took a guilty plea where it went on my record as a misdemeanor, but I didn’t have to do anything extra,” Holub explained. “I just got the 12 hours in jail. I didn’t even make it to real jail; I just stayed in booking.”

Now that the legal process is over, Holub is working on finishing college, focusing on his art and trying to make a living. This summer, he decided to work with Culture Clothing in Lubbock to sell t-shirts with his banner across the front.

“It’s a good way to give everybody a piece of the banner if they want to wear it,” Holub said.

Holub’s street art seems to have done the job, challenging stereotypes and making people question how they think about the world and the cultures people are so quick to pass judgement on.

“I want to change people’s ideas, make people realize their own biases,” Holub said. “I guess, in a way, the world is shrinking. People groups who would never encounter each other 50 years ago are living in the same cities. When our elected leaders openly speak negatively of minority groups, I think there needs to be a public response to let people know that not everybody agrees.”