Escape from Baker house of horrors in ‘Resident Evil 7’

Scared doesn’t even begin to describe the experience I had during my time with “Resident Evil 7.”

My idea of unwinding doesn’t normally involve deliberately frightening myself. That’s not to say I don’t appreciate a good thrill. Universal Studios Florida is one of my favorite places on earth. I enjoy movies such as “Scream” for their cinematic mastery of expectations. But these are all experienced in a controlled environment, on my own terms.

Even on a theme park ride where I can feel the heat of the flames, or the rush as I’m hurtled up and down a track, I can always tell myself that the designers of this ride wouldn’t let anything bad happen to me. It’s just not allowed.

“Resident Evil 7” expertly weakens that reassuring part of my brain.

The 11th story in the “Resident Evil” game franchise finds a man named Ethan Winters in search of his missing wife, Mia. After three years of no contact and presuming she is dead, Ethan receives an email from her, with her location and a plea to come get her. Ethan’s arrival at the Baker home in the heart of a dense Louisiana bayou marks the first in an innumerable list of unwittingly poor decisions he makes throughout the course of the game.

I found myself naively bounding through the plantation’s overgrowth toward the imposing house, simply taking in the immense amount of detail filling out the wet, swampy environment. It wasn’t until I opened my first door and found myself plunged into the thick darkness of an abandoned and rotting house, lit only by my feeble flashlight, that I realized what I was really getting myself into.

This installment departs from its predecessors in a crucial way: the move from third-person to first-person point of view. Ethan moves through the majority of the game from dark room to darker room, with a narrow beam illuminating a focused circle directly in front of him, like a giant’s eye silently scanning for anything out of place. The new perspective, combined with the lifelike depth of field, makes for an intense and discomforting realism in these shadowy moments, with the creaks and bumps of the decaying house eventually training the player to stop in his or her tracks and hold their breath for an encounter.

The sound design in the game is also as impressive as it is utterly anxiety-provoking, and it’s almost impossible not to adapt a sort of stuttered cadence when walking between rooms and around corners in terrified anticipation. Fortunately for some, and unfortunately for many others, there are plenty of payoffs resulting from this learned behavior. 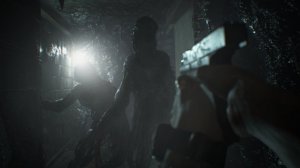 New creatures for the series, horrific black monsters known as the “Molded,” have a habit of materializing from the ooze-infested walls directly in Ethan’s path. The vicious swiping of their claws and gnashing of their horrifying, elongated teeth are more than enough fuel for any veteran horror game player’s nightmares.

The crazed Baker family has been “molded” as well, in their own way. Jack Baker, or “Daddy,” heads the household, which includes his wife Marguerite, son Lucas, and another woman in a wheelchair referred to both in conversation and in-game text directions simply as “Grandma.”

At one point in the story, they sit Ethan down for a nice family dinner, even thoughtfully restraining his hands and feet, as they attempt to force-feed him a disgusting pile of grey sludge that will apparently help him be welcomed into “the family.” Their madness seemingly knows no bounds, and the player will spend most of Ethan’s time attempting to thwart their plans for him, both by solving intricate puzzles that span multiple locales within the plantation and by obtaining weapons that perform increasingly satisfying degrees of damage.

The scaling of the arsenal in the game is one of the most rewarding systems found in any major-studio game found today. When Ethan finds a chance to use a new and better weapon on an enemy, it packs a punch that feels real and exciting, with the enemy realistically stumbling, or, in some cases, spewing a sickening blast of inky black fluid from the site of the wound. I’m not the type to usually enjoy such intense gore or graphic imagery, but in this game, it not only feels justified, but an ultimately necessary thread that makes up the larger story of survival and escape. I wanted to rid myself of these horrors as quickly as possible, so I worked harder and more efficiently to accomplish that goal. 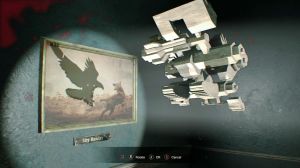 The puzzles littered throughout the game serve many purposes, such as feeding tiny scraps of background lore and storytelling, hiding secrets and a-ha details that reward completion and diligence with foreshadowing what’s to come, linking pieces of the house’s chilling main storyline, sometimes even serving as literal keys from one wing to another. The difficulty of these riddles is rewarding enough to warrant perseverance without being overly frustrating, and rides that line comfortably and with great skill on the part of the creators.

I struggled to take mental note of things to complain about during my time playing the game, and I’m relieved there was so little to find, even considering my normal displeasure with being scared and seeing such striking violence. But zooming out of the immersive nature of the game a bit, one major issue I have would be with the disconnect between the main gameplay and the handful of “boss fights,” which is a gaming term for lengthier battle sequences with a more intelligent or difficult enemy—the aforementioned “boss.”

During the course of the main narrative, I found myself jumping at tiny sounds or sights that were out of place. It was this subtlety of the different elements that ultimately worked so well in the game’s favor to create such a frightening atmosphere. But in these boss fights, I often spent minutes—or in some cases half an hour of dying and retrying—just dancing circles around the enemy’s attacks and waiting for my chance to get a hit in, marveling at the total ineptitude of this foe that had made my hands sweat at the mere thought of their appearance in previous chapters of the game.

This imbalance did a great deal to pull me out of the otherwise well-constructed reality I was happy to fully buy into throughout the rest of the game. This was a small hindrance, however, and I was grateful my brief moments of disbelief could be re-suspended when they were done.

The player will enter the game with many questions. Why has Mia suddenly made contact after such a long time gone? Why have there been so many missing people reported through the years? What has the Baker family become? And, especially, what are the motivations of a mysterious inhabitant who calls Ethan from inside the house to give him guidance about escaping the abominations of the property?

With so much both to gain from exploration and to avoid at all costs out of fear, one question always remains the same: what exactly awaits beyond the next door?