[Editor’s note: This story is the first part of the three-part series “Doggone It!” examining the differences between therapy dogs, service dogs and emotional-support animals that begins with Issue #9 and concludes in Issue #11. Several staff members took it upon themselves to interview, take photographs, and conduct research. The results of their combined efforts follow.] 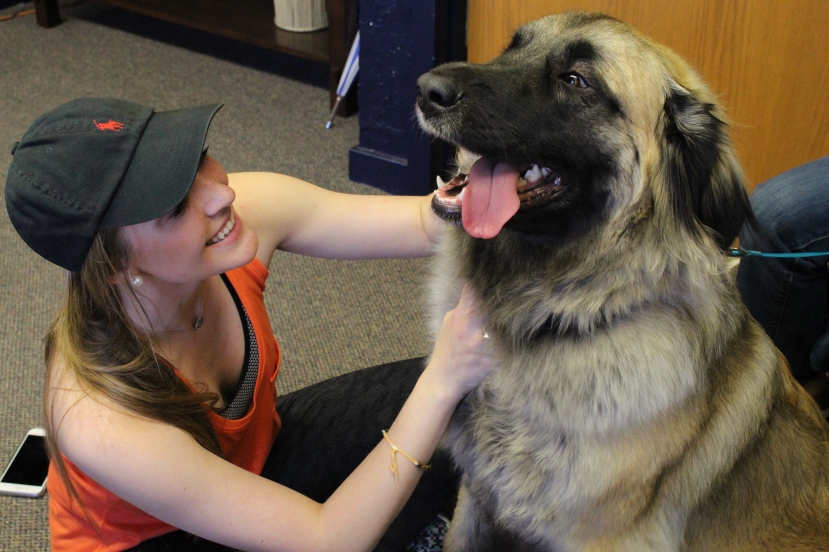 Everyone gets stressed out, especially students. Sometimes all it takes to calm down is a big, furry friend to love.

According to the Americans with Disabilities Act (ADA), therapy animals provide people with therapeutic contact, usually in a clinical setting, to improve their physical, social, emotional, and/or cognitive functioning. Therapy dogs are not service dogs. Therefore, they do not have the right to be brought into public establishments, such as restaurants or classrooms.  Therapy dogs provide people with therapeutic contact to improve a person’s physical, social or emotional functioning.

When Lynn Gregory’s children began moving away to attend college, she sought out something to do as she entered the empty-nester stage of life. That’s when she discovered a therapy dog breed, Leonbergers (Leos).

Uncommon in the United States, Leos are extremely large dogs and require a great deal of exercise, attention and space. Though they look intimidating, Leos are very friendly dogs and well suited for work as therapy dogs.

According to Mike Felker, a retired English professor at South Plains College, Leos are cold weather dogs, so you wouldn’t expect them in West Texas. But there are six in Levelland, two in Shallowater and one in Lubbock.

“Raising Leonbergers is relatively easy, because they’re not hyper,” Gregory said. “But they must be trained, and you do have to spend a lot of time training them. As far as having them in the house, it’s a great breed. They’re really easy to deal with. I mean, how many dogs will let a stranger walk up to them and pet them? They’re a good natured breed for the most apart.” 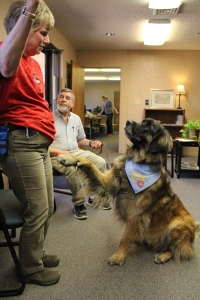 Gregory, a health and wellness counselor at the Reese Center campus, is becoming more involved in working with Leos and therapy dogs as she continues to be mentored by Liz Brandt, a retired teacher at Ropesville ISD, and Felker, watching and learning from what they have been doing for the past seven years.

“It’s extremely rewarding to work with the dogs,” Gregory said. “It’s the smiles on people’s faces and the memories it brings back, especially for the elderly. When I take my dogs to assisted living, it just gets everybody talking about their animals. It’s such a great way to engage people and get them out. It just brings so much joy to people.”

Gregory, Brandt and Felker all work with their Leos at the South Plains Obedience and Training Club (SPOTC), where they have met others who are training therapy dogs. SPOTC allows dog handlers to pursue obedience and agility training, and others can pursue therapy work.

“The Residence Hall Association called me last year and said, ‘We hear you have dogs. Would you be interested in bringing them to the ‘Stress Relief Day’ we’re doing?’” Gregory said. “And I knew that SPOTC had been going to Tech for years during finals, so I thought ‘We need to get them out here [at SPC].’”

The moment Gregory made her mind up, she immediately called SPOTC, Brandt and Felker for assistance in the ‘Stress Relief Day.’

Gregory said she hopes to continue the ‘Stress Relief Day’ during finals week, but hopes to advertise more for future events.

“The biggest thing is that I just see so much potential in the future, and I want to keep that really going,” Gregory said. “Now my plan is to call everybody, as soon as I know we’re going to do it again. I want to get a bunch of dogs. So I’m going to go to the obedience club and get the word out so we can get many dogs to come.”

Dogs who are going to be used in therapy go through several levels of training, which begins when the dog is around eight or nine weeks old.

“They go through heavy early socialization training,” Brandt said. “Puppy people are told that puppies are supposed to be almost over handled. They go through a puppy class which introduces basic dog obedience concepts.”

Next, the therapy dogs go through a household manners class, which teaches them the basic home concepts such as sit and stay.

The Canine Good Citizenship Training & Testing includes things such as accepting friendly strangers, walking on a lead, walking through a crowd and how the dog reacts to new situations, distractions and other dogs. There are many testing criteria for this training, but once passed, the dog is certified Canine Good Citizen and can pursue registration as Therapy Ready Dogs.

Once the handler and dog pass that general test, then the team goes on three supervised visits, and the person conducting the test evaluates how well the team works together.

Gregory, Brandt and Felker also have their therapy dogs compete in dog shows, or conformation showing. These shows are used to evaluate breeding stock, which means the dog’s overall appearance and structure, which are indications of the dog’s ability to produce quality puppies.

Brandt stresses that anyone can become a therapy dog owner. You just have to be someone who can handle and interact with dogs well. The same goes for the therapy dog.

“Not all dogs have the personality to be used for therapy,” said Brandt. “Any breed of dog can become a therapy dog. Any dog with the personality for it, it doesn’t matter what kind of dog, rescue dogs, dogs with every type of dog in them, big dogs, little dogs. Weird-looking dogs. Scary-looking dogs. It all depends on their personality.”

According to Brandt, the Bully breeds are wonderful therapy dogs, since this breed generally loves people. So it rings true that any dog can become a therapy dog, depending on its  personality.

Therapy dogs cannot be pushed into situations they don’t feel comfortable in, the same way you wouldn’t force a person into an uncomfortable position. Having a lot of people pay attention to you can be really tiring, so a handler has to know his or her dog’s limits.

“Not all dogs do all things,” Brandt said. “Sometimes your dog isn’t in the mood for a therapy visit. It needs to be allowed to say no. Some dogs do well with kids; some dogs do well with older people. Every dog has its niche. There are even a number of dogs in our club who do reading programs in Lubbock.”