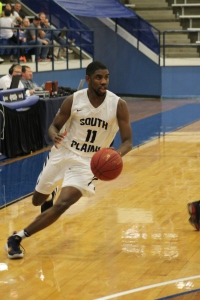 The South Plains College men’s basketball team is looking to bounce back from the first loss of the season while preparing for the NJCAA National Tournament.

The top-ranked Texans had been undefeated entering the Region V tournament that took place March 8 to March 11 at Frenship High School in Wolfforth.

The Texans took on Western Texas College in the semifinal round of the NJCAA Region V tournament on March 10. Despite a good shooting night from the Texans, they dropped a 82-74 decision for the first loss of the season.

The Westerners jumped out to a 19-9 lead to start the game, before the Texans were able to go on a run and take a 25-23 lead.

After tralling 32-31 at the end of the first half, the Texans were able to come back and take the lead in the opening minutes of the second half. But Western Texas was able to retake the lead and held it for the rest of the game, outscoring SPC 50-43 in the final 20 minutes of play.

Freshman forward Jahlil Tripp led the team in scoring with 18 points, while freshman guard Josh Webster chipped in 17 points and had a team-high four assists. Sophomore forward Shawntrez Davis came off the bench to lead the team in rebounding with six and added seven points.

The Texans were able to dominate in first-round action of the Region V tournament, downing Hill College, 100-78, on March 9.

The Texans were able to keep up with a consistent offensive attack as Hill College focused their efforts on stopping sophomore guard Jordan Brangers. But with a great defensive effort, the Texans cruised to victory.

After getting off to a slow start offensively, the Texans were able to get their offense going and built a 50-39 by the end of the first half.

In the second half, the Texans where able to continue pouring on the points, matching their first half-point total.

Looking to secure a perfect record with the regular season nearing an end, the Texans did just that with a 109-76 victory against Western Texas College on March 2.

The Texans’ offense was hot all night long. Brangers was able to break Marshall Henderson’s school record of 128 3-pointers in a season, with the record-breaking shot coming in the first half.

The Texans were able to get off to a fast start on offense, knocking down 10 3-pointers.

Tripp led the team in scoring and rebounding with a season-high 26 and 13, respectively. Brangers chipped in 19 points, while red-shirt freshman guard Raquan Mitchell added 17 points. Webster led the team in assists with seven and added three points. Gillard added 16 points off the bench, while Gallinat chipped in 14 points.