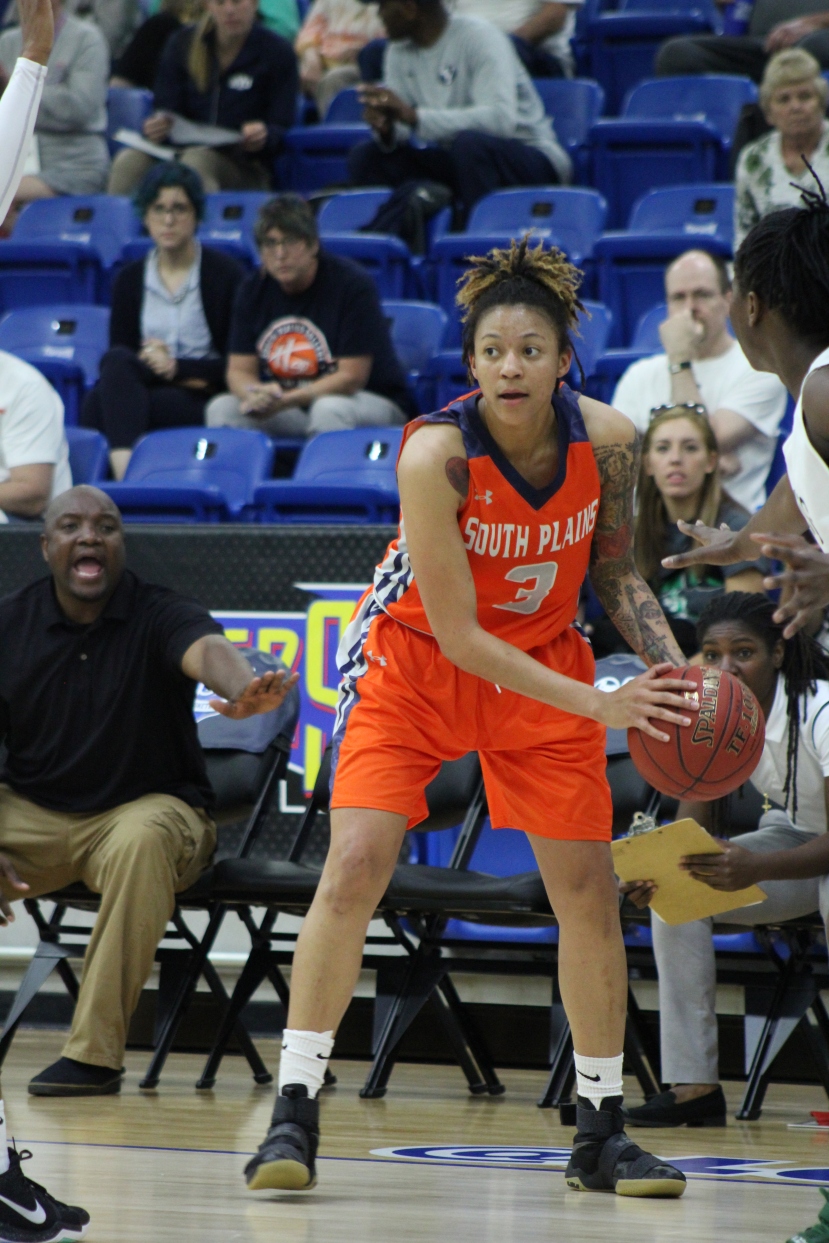 After earning a trip to the NJCAA Division I Women’s Basketball National Tournament, the South Plains College women’s basketball team advanced two rounds before having the season come to an end.

Finishing the season at 28-6, the ninth-ranked Lady Texans fell in the round of 16 to Seward County Community College, 87-69, at Rip Griffin Center in Lubbock on March 21.

The Lady Texans worked quickly to gain an early lead in the first quarter, jumping out to an 8-0 advantage. However, as the quarter came to an end, the Saints found offensive production around the three-point line, pulling within one point of SPC at 17-16.

The Lady Texans’ offensive attack was being led by sophomore forward Yanina Inkina. SPC found open looks on the inside, along with down-range three-pointers, to open the floodgates for point production with 25 points in the second quarter.

As for Seward County, defensive struggles allowed SPC to stay close, but the Saints’ offense gained momentum as well, finishing the second quarter with 30 points to take a 46-42 lead going into halftime.

With only a half to go and trailing by four points, the Saints continued to put pressure on the Lady Texans defense in the third quarter. Seward took advantage of early momentum and scored 23 points to keep the lead.

The Lady Texans stalled on offense in the third quarter and could not get shots to fall in their favor, scoring only 12 points. However, the Lady Texans trailed the Saints 69-54 going into the final quarter.

With the clock winding down on the Lady Texans, Seward continued to attack offensively, scoring 18 points to expand the lead.

SPC worked to find open lanes and squeeze out points in the end, scoring 15 points in the fourth quarter. Defensively, the Lady Texans struggled to shut down an efficient Saints offense.

The Lady Texans had four players score in double digits in the contest.

Inkina led the way with 18 points. Sophomore guard Elizabeth Cera finished the game with 15 points, while sophomore guard Jasauen Beard was close behind with 14 points.

Sophomore guard Brittany Smith scored 11 points to finish off her career as a Lady Texan.

In the opening round of the NJCAA National Tournament, SPC defeated Monroe College 85-73 at the Rip Griffin Center in Lubbock on March 20.

After a slow start in the first quarter, the Lady Texans encountered early trouble offensively, only scoring 11 points and allowing 17 points on defense.

With a six-point difference entering the second half, the Lady Texans continued to attack offensively throughout the third and fourth quarters.

Monroe rallied by scoring 21 points in each of the last two quarters.

After capping off an offensive night for the Lady Texans, Beard finished with a career-high 31 points.

Inkina finished the game with 22 points, while Cera chipped in 13 points.

After completing her second year and leading the Lady Texans to the NJCAA National Tournament, SPC head coach Cayla Petree was named a finalist for the 2017 United States Marine Corps Women’s Basketball Coaches Association National Coach of the Year award.