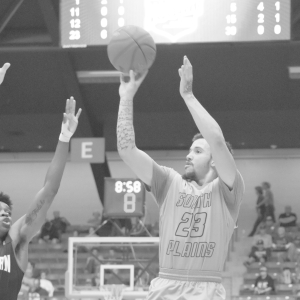 The South Plains College men’s basketball team finished the season in third place after advancing to the national for fourth time in six years.

The Texans finished the season with 33-2 record, following a perfect regular season.

“It was an outstanding season,” said Steve Green, head men’s basketball coach at SPC. “We introduced a new style of playing to the league, a team built around a three-point attack.”

Green credits the success to the players and coaches.

“Who wouldn’t want that if given the choice at the beginning of the year,” Green said. “To run the table in both the conference and entire regular season is a tremendous accomplishment for these players and coaches.”

The Texans advanced to the Division I National Junior Collegiate Athletic Association Men’s Basketball National Tournament, which was held March 20- March 25 at the Hutchinson Sports Arena in Hutchinson, Kansas.

The second-seeded Texans took on the number-eight seed, Northwest Florida State College, in the third-place game of the National Tournament on March 25. With a hot shooting night and tenacious defense, the Texans pulled away for a 103-75 victory.

Northwest Florida State was able to stay close with the Texans during the first part of the first half, with the score being 22-20 with 10 minutes left. But SPC was able to go on a run and stretch the first-half lead to 47-34.

Eastern Florida State brought their top-ranked defense into the game, holding the Texans’ offense down in the first half. Yet the Texans were able to still keep things close in the first half, trailing only by three points, 33-30, entering the second half.

In the second half, both teams were able to keep up the defensive pressure. With about 12 minutes left, the Texans took a 46-45 lead, but they were not able to hold on. SPC was outscored in the second half 44-35.

Brangers led the team in scoring with 18 points, while Tripp chipped in 11 points while leading the team in rebounds with nine. Gillard came of the bench to score 11 points.

In the quarterfinals, the Texans faced the seventh-seeded Vincennes University on March 23.

After poor shooting nights from both teams, late heroics from Brangers helped the Texans to a 69-67 victory.

Both teams struggled to find their offense in the first half of the game. After going back and forth for most of the first half, Vincennes was able to take a 33-32 lead.

The Texans traded baskets with Vincennes for most of the first part of the second half, before SPC went up by four with 14:45 left to play in the game.

With the game remaining close for the rest of the game, Vincennes was able to take a one-point lead with 10.4 seconds left. With only five seconds left, Brangers hit a deep three-point shot to win the game for the Texans.

Green says the shot was “a great made basket by an outstanding basket maker.”

Brangers led the Texans in scoring with 19 points, while sophomore forward Montell McRae chipped in 11 points. Webster was able to lead the team in rebounding with eight points and four assists. Coming off the bench, sophomore guard Roberto Gallinat added 11 points.

The Texans took on the number 15-seed Panola College in the second round of the NJCAA tournament on March 21. Both teams were locked in a tight battle throughout the contest, before the Texans pulled out an 88-84 victory.

Brangers led the team with 18 points, while McRae chipped in 14 points. Tripp contributed a double-double with 14 points and 10 rebounds. Webster led the team in assists with five while adding three blocks. Gillard added 12 points off the bench.

When looking back on past teams and how this team compared, Green said, “South Plains College has been home to many outstanding teams, and this club will take its respective spot near the top along with others.”

“An undefeated regular season, unblemished throughout what is arguably the most competitive conference in juco basketball, and scoring at a 90-plus point per game average is worth special distinction,” added Green.