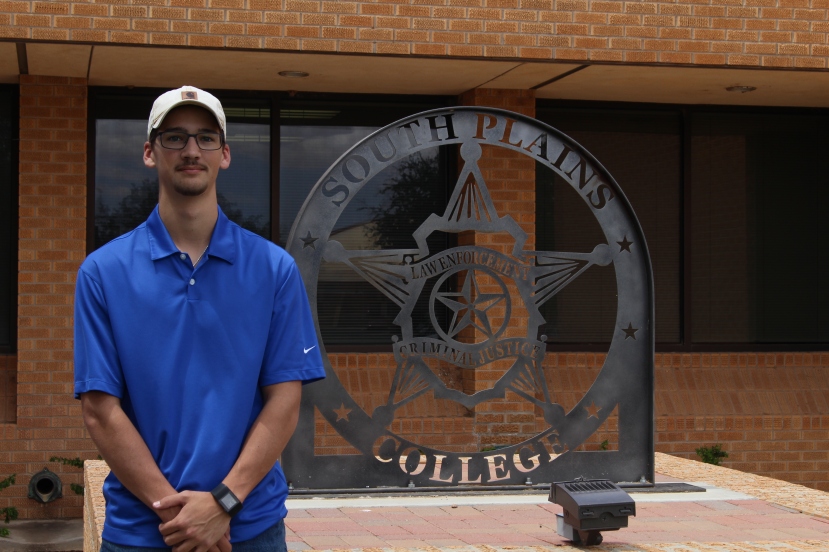 Davis Browne has a passion for law enforcement, with hopes of seeking a career in the United States Border Patrol.

“For law enforcement now, it’s kind of criticized and looked down on,” Browne said. “But you just have to look past that. Don’t take someone else’s word for it. If you want to do Law Enforcement, then do it.”

A sophomore at South Plains College studying Law Enforcement, Browne says he hopes to one day use his degree to pursue a career within the United States Border Patrol.

“I’ve wanted to do Law Enforcement since I was a kid,” Brown said. “My dad wanted to be a trooper, but he never got an opportunity. So it’s been kind of a whole family thing.”

Prior to attending SPC, Browne lived in Snyder, attending and graduating from Hermleigh High School.

The family business has helped Browne make several Law Enforcement connections through the years. Seventeen years ago, Browne’s father began Texas Rustic Metal Art. Though he’s in school full time, Browne tries to find time to help in the business, since it has been such an influence in his life.

“SPC has had a great impact on my life,” Browne said. “I’ve made new friends that I wouldn’t have if I hadn’t come here. It’s helped me figure out life on my own, and to rely less on my parents.”

After touring the Federal Law Enforcement Training Center in Artesia, New Mexico during the Fall 2016 semester for class, Browne realized how much he wanted to pursue a career with the U.S. Border Patrol.

“It was an experience you don’t get to do in your daily life,” Browne said. “It helps that I know Chief (Dan) Harris, and I’m friends with his son. So we got to go talk to him. It was nice to get his viewpoint on things, and we got to tour the center. We were able to shoot some automatic guns, so that was cool. Something you don’t get to do every day. And that’s kind of the perk of law enforcement and the college here; you don’t usually get to do that type of stuff as a regular person.”

Browne has a personal friend who has worked with a Border Patrol Agent who lived in Fort Davis and was later stationed in Idaho, where he is currently serving on the Canadian border for the Border Patrol.

“There’s just so many options to move around the nation,” Browne said. “And then there’s so many jobs you can do. There’s the marine unit. They have their own SWAT team. It’s kind of like taking all the law enforcement jobs you can do and putting it into one federal career. I just really like the variety of choices the Border Patrol offers.”

As he will be graduating from SPC this month, Browne plans to look into the Border Patrol after taking care of college and student loans.

Browne says one of his biggest goals in pursuing Law Enforcement is changing people’s minds.

“Not everybody is bad,” Browne said. “The stigma of law enforcement is they’re just out to get everybody. You know? Like not everybody’s bad. There are bad apples, but most of them are good.”