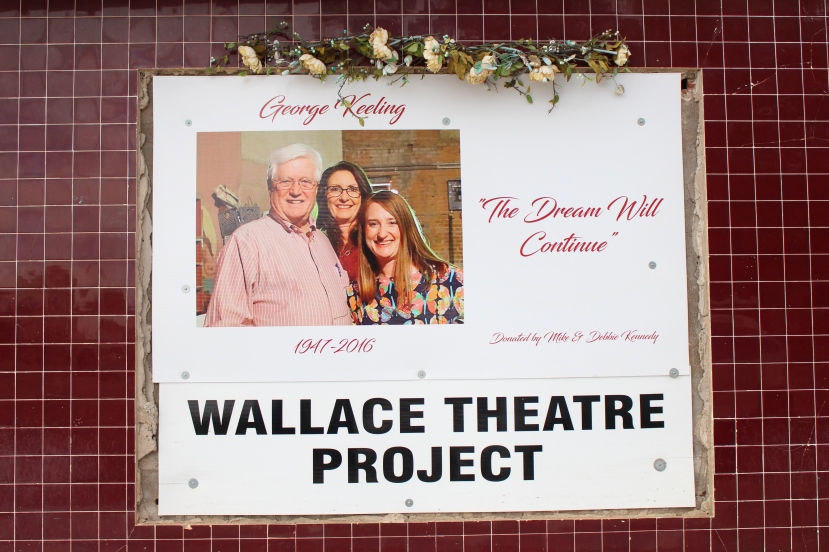 Once upon a time, in a small West Texas town, there was a man who wanted to open a movie theater in Levelland.

The Wallace Theater was created in 1928 by Wallace Rose Blankenship. Blankenship had owned more than 30 theaters in the West Texas region. Bob Hope and Walt Disney wrote letters to Blankenship congratulating him on his success in the theater business.

The original Wallace Theater was built in 1925 across the street from its current location. He saw potential in Levelland, and that great potential is still thriving today.

On October 5, 1949, the Wallace Theater reopened as “West Texas’ Finest.  The Wallace was fully renovated to the theater that Blankenship had been dreaming of since 1926.  At the time, the Wallace Theater was a state-of-the-art theater that boasted E-7 Simplex projectors, 4-star Western Electric Sound, fully upholstered opera chairs, and, most impressively, fully automatic air conditioning.  The renovated theater included deep carpets to hide foot traffic sounds, a cry room and a smoking room.

“The lights of the marquee were described to be as bright as any you would envision on Broadway in New York City,” said Alycyn Keeling. “This is where they would like to take the theater back to currently.”

George Keeling purchased the Wallace in the early 2000s. The Levelland resident wanted to be able to bring the Wallace back to life and bring entertainment back to Levelland. His  daughter, Alycyn Keeling, is currently the executive director of the Wallace.

When George Keeling purchased the building more than 10 years ago, there were significant structural concerns with the second story and loft.  Steel beams had to be installed in the ceiling of the lobby to support the second story, and additional steel work was done in the loft to reinforce the roof.

Alycyn Keeling recalled, “We had to hire pigeon catchers to catch all the pigeons we kept finding in the theater area from the damage on the roof.”

The Wallace is starting to show movies once a month, and they are starting a Kid’s Club on the second Saturday of the month. The Wallace recently showed “E.T.” to kick off their movie nights at the Wallace.

“The goal for the Wallace, other than just reopening, is to once again be a source of great pride and inspiration for the community,” said Keeling. “ It will be a gathering place for the community, where people can find entertainment in Levelland without having to go to Lubbock and can enjoy the company of their friends and neighbors.”

“The Wallace will be a cultural institution in the community where patrons will have the opportunity to find new and exciting entertainment,” added Keeling. “It will revive the nostalgia and wonderful memories that so many members of the community cherish, but will also seek to create new memories and nostalgia for this generation.”

The Wallace is a non-profit organization, and all donations to the Wallace are tax deductible.  Proceeds from every event held at the Wallace goes toward the remodeling of the theater.

“In addition to developing the programming at the Wallace, a large part of the project is working to preserve and retell the history of the Wallace,” said Keeling. “We are still working to identify people in photos and are looking for more old photos and news about the Wallace. This is an area where we need a lot of help from the community.  We’ve had a great response so far, but we still need help with more of the pieces.”