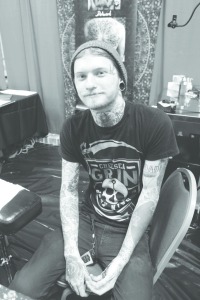 Tattoo enthusiasts come to Lubbock to satisfy their craving for more of the culture.

The first Tornado Alley Expo was held Sept.8-Sept.10 at the Clarion Hotel in Lubbock. People from across the country flocked to the event, including more than 100 artists who came to enjoy the experience and provide a good time for those attending.

It was a whole new level of portraying tattoo culture, including a wide range of entertainment all weekend. The event featured tattoo contests, vendors, a pin-up pageant, comedy shows, and a DJ.

When entering the Clarion Hotel, ladies at the front desk were handing out wristbands and telling guests to have a good time. The energy at the event was instantly welcoming, but also edgy and daring.

People were laying in booths getting tattoos. Some were walking around with bandages over their fresh tattoos, and many had fresh piercings as well. Overall, those in attendance seemed to be having a great time. The booths provided free stickers, temporary tattoos, and knick-knacks that you could buy.

Tattoo culture is a whole different way of life, which is why it is important to learn from the experts.

“I was 17 when I got my first tattoo,” said tattoo artist Jon Miller. “My first tattoo was a [expletive] cartoon duck that I tattooed onto myself. It is terrible. I created the tattoo because I used to have a pet duck when I was growing up, whose name was Alfred. My favorite tattoos ever are sacred-geometry themed tattoos.”

“Also, I will never be satisfied with the number of tattoos I have on my body,” he added.

The Tornado Alley Tattoo Expo was Miller’s first tattoo expo. He said he produced many tattoos at the event throughout the weekend.

“My favorite tattoo that I did this weekend was on a girl’s back on Friday,” said Miller. “It took me about five hours.”

Miller has been doing tattoo art for almost seven years. He said a tattoo artist named Yogi Berra from South America is the one who inspired him. He describes his personal work as “enlightening.”

Lizzett Vargas also was attending a tattoo expo for the first time. She got her first tattoo at the Tornado Alley Tattoo Expo.

“I am from Plainview and got my first tattoo here today, at 21 years old,” Vargas explained. “I also got my nose pierced today. My first tattoo was inspired by the idea to commemorate my uncle, and I would like to get more tattoos eventually.”

The next tattoo expo in Lubbock is scheduled for Feb.2-Feb.4, 2018 and will be the fourth Lubbock Tattoo Expo. The second Tornado Alley Tattoo Expo is expected to return next year.