One South Plains College student has hopes to one day climb the corporate ladder at United Supermarkets.

A freshman accounting student from Whiteface, Dominique Gonzales was first inspired to pursue a career in accounting while she was still a sixth grade student. Gonzales says that her teacher, Carrie Young, noticed her interest in math and computer programs before she became a freshman in high school. 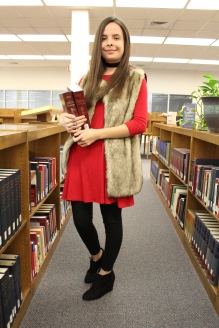 “She invited me to take a class that would consist only of seniors,” Gonzales said. “She was able to really get me into it. Because it covers all of my skills in one profession: my math skills, my computer skills, and my communication skills, all in one.”

Gonzales says that she is fascinated with the theories and ideas associated with math and physics, which she says makes math easier for her.

Currently, Gonzales has been employed for one year at the United Supermarket in Levelland, where she started as a grocery sacker and was promoted to a cashier position. Recently, United Supermarkets held a competition to find their fastest grocery sacker within the state of Texas.  The competition was based on grocery weight distribution and making sure certain items would not be crushed or placed in a position where the items would be ruined.

The United Supermarkets District Sacking Contest was held on July 16, with the regional competition held on Sept. 26 at United Market Street in Lubbock.

Gonzales says that she initially did not intend to enter the competition, although she appreciates all that the competition brought to her, including a pocket full of money.

Gonzales says that she has hopes to one day work as an accountant for United. She says if this plan ends up not working out, she would also enjoy a job teaching, something she says comes to her naturally.

“I would love to coach high school students for UIL,” she said. “I used to do computer applications in accounting. As a senior, I used to train freshmen. Now that I’m gone, they don’t have anyone to do that, so I’d love to volunteer.”

Although she is a freshman, Gonzales says that her transition from high school into college was easy after taking the measures to prepare herself for higher education.

“At Whiteface, they really prepared us for the transition,” she explained. “They gave us tons of homework in our AP and dual credit classes. When I got here, I thought, ‘Wow. What a relief.’ I knew what to expect, and campus is close to home. So it made it that much easier.”

Gonzales says that something she is told often is that she is well rounded. From a young age, Gonzales says her parents led her to believe that she had the potential to do anything she put effort into.

“I find motivation in my parents,” she said. “They help push me to do good things. My teachers have also motivated me. They tell me to always begin something with the end in mind.”

She says that one goal she has in her mind is to maintain her grade point average of 4.0. She says that she takes any opportunity to complete extra credit assignments and answer bonus questions.

“That’s probably what motivates me the most,” Gonzales said. “I try to be the best I can, and not just academically. I like being a leader in our small community.”

After obtaining her associate’s degree in accounting from SPC, Gonzales plans to continue her education at Lubbock Christian University because of the class volume that is similar to that of classes at SPC.

“With God’s favor, anything is possible,” she said. “Fill out every scholarship application you can. Not filling one out gives you no chance of receiving any scholarship.”