A ceremony recently was held to commemorate the grand opening of the new innovation hub at South Plains College, the Maker Space.

“Several years ago, we applied for a STEM grant,” said Alan Worley, chairperson of the Math and Engineering Department, “and one of the ideas that came from the STEM grant was producing things like the Maker Space. And at the same time, we sent some students to the University Innovation Fellows in Silicone Valley. Dr. Ramesh Krishnan has been taking the students over there [and] mentoring them.” 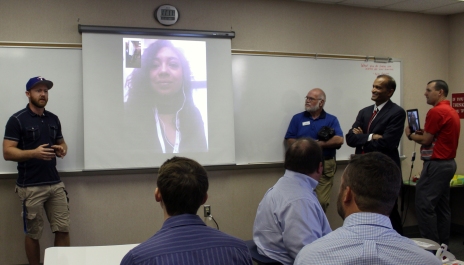 Worley said that they were having the same ideas at Stanford University.

“So,” said Worley, “we had students come back with these ideas, and we said, ‘Hey, let’s see if we can make this happen.’ Obviously we can’t build a new building so we converted a classroom into a Maker Space, a student community.”

Worley said the idea is for the Maker Space to be a community where students can “create, innovate, collaborate, study.”

Nancy Muñoz, a sophomore engineering major at SPC, a SPC Timmy Frieson, am alum, have been instrumental in bringing the Maker Space to SPC.

“They picked the furniture out,” said Worley. “All of the furniture has white board tops on it. It’s all adjustable, and everything is mobile.”

Muñoz was in Utah presenting research that she had done at Stanford University during the summer and was not present at the ceremony, while Frieson was present at the event.

Frieson said he has received opportunities because of his work with the University Innovation Fellowship and S.E.A.R.Ch., including local opportunities.

“I’m at [Texas] Tech now,” said Frieson. “I went to the engineering job fair and on my resume I have S.E.A.R.Ch., I have U.I.F. I got seven interviews, and in every interview they told me that the reason they chose to interview me was because of S.E.A.R.Ch. and U.I.F… They were interested in the idea of entrepreneurship and innovation.”

Although Muñoz was out of town, she called in via FaceTime to make a few statements on the project that her and Frieson have worked so hard to bring to SPC.

“I’m really glad that Timmy and I were a part of the group that brought the Maker Space to SPC,” said Muñoz.

A project outline is visible on one of the dry-erase walls, and Muñoz recognizes the effort that the students have put into their project and have already taken advantage of the Maker Space.

“The first couple of weeks it was open [students] were already collaborating on the app project on the wall,” said Muñoz. “I’m really inspired by what’s already come out of the Maker Space.”

Humera Fasihudden, who Dr. Krishnan introduced as “the heart and soul of this program,” is co-director of the University Innovation Fellows Program, who trains students to create a lasting impact on the innovation environments on their college campuses.

“South Plains is the first community college in our network,” said Fasihudden, who spoke via FaceTime on a projector. “You are thinking about your life’s purpose,” and “you are learning how to learn.”

Speaking to the large step forward that the Maker Space signifies for SPC and University Innovation Fellows, Fasihudden said, “We are living in such interesting times.”