Comics are a form of social history.

“They tell us about the time,” according to Robert Weiner, humanities librarian at Texas Tech University. “Comics have always been like any part of pop culture. They tell us something about who we are.”

Comics, specifically American comics, have a tendency to reflect the social and political landscape of the country. “I think at a certain level, comics can’t help but deal with social issues,” said Roy Bearden-White, assistant professor of English at South Plains College. “The very idea of the superhero is dealing with right and wrong. That’s a lot of what we deal with on a daily basis. In another respect, I see comics as a reflection of who we are.”

In one of this year’s comic book film adaptations, “Logan,” Bearden-White says that the movie had to end the way that it did because of the country’s current political makeup.

“Wolverine dies,” Bearden-White said. “You get to the end of that movie and the idea of hope is really gone. As a reflection, we’re coming out of this very turbulent presidential election where both sides are feeling excluded and neither side can see a way to work together. I think that movie had to end like that at that time.”

But, the death of a superhero is not always as well received as it was in “Logan.” As much as experiencing the death of a fictional character can teach people about death, it can also deeply affect them.

“I remember, I must’ve been 9 or 10, reading a story from the Legion of Superheroes [comics], where a character died,” said Weiner. “I’ve since been told it was Chemical King, and to this day I’ve not reread that story because it really affected me. It felt like a friend had died. And I know, historically, a lot of people go back to the Spider-Man story of Gwen Stacy’s death, and that being such a pivotal moment – that teaching them about death and what that means. But for me, it was that Legion of Superheroes story, which really affected me. I felt it.”

In 1992, Bearden-White’s favorite superhero, Superman, died, and this left him, and many others, feeling betrayed.

“I’ll tell you one thing that shifted the culture, 1992,” said Bearden-White. “They killed Superman. I had a very hard time explaining this. At the time, I grew up with this. And it was a symbol of everything that was pure. And then it wasn’t. And then it was a blatant trick. I resented that. When you grow up with a character, you do feel ownership of that. I felt it was taken away from me. To this day, I have not, nor will I buy a Superman comic.”

Because people feel this ownership of these characters, even when they’re not being killed off, these stories and their characters need to be handled delicately. Sometimes exploring deviations from a character’s true self can be met with appreciation, but sometimes it can be met with pure rejection. 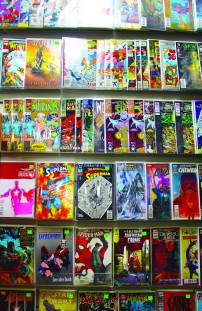 “I hate what [Zach Snyder] has done with Superman,” said Weiner. “Because [he’s] tried to make him dark, and he’s not. Superman was actually – before we had such a term – a social justice warrior. He was really socialist in those early issues. [He] fought corruption in governments and literally overturned governments that had terrible policies toward their people. It changed later to him being truth, justice, and the American way.”

Superman isn’t the only patriotic character that writers have a hard time handling. Fans of Superman despise his death, and fans of Captain America hated his most recent story arc.

Captain America switched sides to Hydra, a villainous organization in Marvel comics. Not only was it rejected as any kind of plot twist, but readers saw it as a trick from the get-go.

“With all of Marvel’s attempts at equalization,” said Weiner, “with the Hydra Cap, they have offended not only Cap’s Jewish creators, but every soldier who fought in World War II, and all of those who died in concentration camps.”

Bearden-White says that a character changing and evolving is a necessity. But, it has to be done with thought and care, and sometimes it’s just better to create a whole new character.

“Some of my new favorite characters have been some of these socially diverse characters,” said Maxwell French, an employee at Monster Lair comics in Lubbock and a microbiology major at Texas Tech. “Sometimes they work, sometimes they don’t. They always work best when it is its own new character. Whenever you just rebrand a character, force diversity, it doesn’t work as well. I think people will accept it more if it’s a new thing.”

But that’s not to say that people hate a diverse change to a character, if it makes sense. Iceman recently came out as gay, and the Mighty Thor is currently Jane Foster.

“Iceman is gay,” said Maxwell. “There were some negative reactions from the older comic community, but for the most part, it was pretty positive… Women in comics recently, they have been stepping up. You’ve seen a lot more female-led titles. When the female Thor stepped in, no one really complained. The female Hawkeye – people said that didn’t really make sense. But things like “DC Comics Bombshells” has been super popular, and it’s pretty much only a female audience with female characters.”

With the introduction of gay characters and women into major roles in comics, along with story arcs that are constantly evolving, some of this knowledge may linger within the community for years before the rest of the public knows about them. But because so many people grew up with comics and superheroes, coupled with the fact that you can’t play video games or watch movies without coming across a comic book adaptation, these heroes can be seen as modern-day folklore.

“Danny O’Neil, a Batman writer, talks about how he realized when writing Batman, that he was a keeper of folklore,” said Weiner. “Let’s be honest here, more people today know the story of Batman, Superman, and Spider-Man, than they do Odysseus or Ulysses. You can go anywhere in the world, and between the ages of 3 and 120, whether they’ve read a comic, picked up a video game, or even seen a movie, you show them that picture (points at Spider-Man image), they’re going to know Spider-Man, Batman, the Joker, Superman, and Wonder Woman.”

“So these characters are a part of our collected unconsciousness,” added Weiner. “They resonate. And I don’t see that going away anytime soon.”

Comics have so many facets, and one of the most important is the villain. Weiner recognizes this, and he has helped write an analytical book on the Joker.

“The Joker, in all his iterations, whether he’s playing practical jokes on Batman – simple, harmless – or being the torture-porn character that he is today, represents our deepest fear: chaos,” Weiner said. “And he represents the way the world really is. The world is a chaotic place. There is no real security in life. Because there aren’t always answers, and the Joker teaches us that… The Joker is interesting, because he’s just as likely to let you live as he is to kill you, depending on his mood.”

“For a long time,” said Weiner, “comics were looked at as literary and artistic trash, that they can make you stupid. But now, brain researchers are finding out that it’s active engagement. Educators are finding this out too, because you look at a sequence of pictures, and you read the text that’s there. You have to make inferences; your brain is working to do that. So instead of making you dumber, comics can actually make you smarter.”

More than anything, comics are a reflection of the culture, but their impact on society is also apparent.

“It doesn’t really matter that comics are still kind of a niche audience, as opposed to the ‘40s when they sold by the millions,” said Weiner. “The stories are with us… The impact and influence of comics is everywhere… Whether it’s graphic novels, films, video games, toys, memes, YouTube mash ups, or political cartoons, their impact is everywhere.”