Discover the origins of the assassin’s creed on a journey of exploration through Ancient Egypt.

“Assassin’s Creed,” developed by Ubisoft, is a Third-Person Action/Adventure videogame series that sends players to pivotal moments of history as an extremely acrobatic and parkour-capable assassin.

In “Assassin’s Creed: Origins,” players take control of Bayek, a man driven by vengeance, like so many assassins that follow in his footsteps. But, Bayek does not call himself an assassin. In fact, when the game starts, he’s not really an assassin by any definition. He is a Medjay, a protector of the people of Egypt.

However, the subtitle of the game, “Origins,” refers to Bayek being the first assassin, which would make sense since 49 BC is the farthest back the series has ever gone.

Players of the series have experienced the Italian Renaissance, the American Revolution, the Golden Age of Piracy, and several other settings, with Ancient Egypt being the most recent. 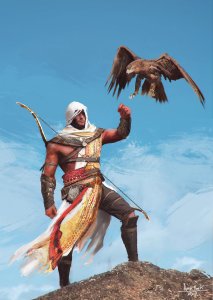 Bayek is on a mission to avenge the death of his young son, which was the doing of a group of blue-masked men.

Since the death of his son, Bayek has been consumed by rage, which is evident when fighting guards or other enemies. Bayek’s fighting style is extremely brutal, and Ubisoft has turned up the gore effects, which I really think adds to the immersion.

Ancient Egypt was a brutal and deadly place, and this is reflected on the gameplay.

Fighting in the “Assassin’s Creed” series was previously based on a hit-box system in which enemies could attack. As long as it’s timed right, the player will counter the attack, with the result being a satisfying kill animation.

But, in “Assassin’s Creed: Origins,” the fighting style has been completely revamped. It’s much easier to become overwhelmed and die in “Origins,” as opposed to previous installments.

Players have to dodge, block, or parry attacks, and choose their opportunity to strike wisely, or they can end up being run through. Players are more susceptible to being killed by an enemy who is several levels above them, so it’s best to do side missions or clear forts that are around the same level as the player.

“Assassin’s Creed” has developed R.P.G.-like features as the games have progressed, but “Origins” is almost a full-blown Role Playing Game. The new leveling system is a good indicator of this.

Players and enemies start at level 1. As players explore, they will increase their level and quickly find enemies that are levels above their own, too tough to damage, and very quick to kill Bayek.

Although it’s not impossible to take on enemies several levels above yours, it’s even more challenging to do so if you’re ill equipped.

“Origins” is full of R.P.G. aspects, and one of those key ingredients is being able to consistently find or buy weapons that look cooler and provide more damage than what you already had.

There are several weapons classes that are divided into two major categories – ranged and melee. 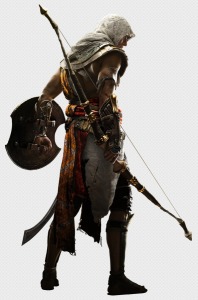 There are straight swords, sickle swords, and combinations of a sword in one hand and a dagger in the other. All of them are good for fighting guards, but when overwhelmed, it’s best to go with a weapon that allows you to defend yourself with your shield.

Shields can be found or purchased as well, and they range from larger ones to smaller ones.

Ranged weapons are bows, and there are several different types of bows. The warrior bow fires multiple arrows at once and works kind of like a shotgun. Predator bows zoom in and work like an ancient sniper. The light bow is fast and ideal for mounted warfare, and the hunting bow is an average bow that’s ideal for hunting animals or people.

Hunting animals is a necessary part of “Assassin’s Creed: Origins” because it gives players the materials they need to craft better bracers, hidden blades, chest protection, and pouches.

All of these weapons and upgrades are necessary to Bayek’s survival in Ancient Egypt, a dangerous and breathtaking land.

Game Director Ashraf Ismail refers to one of the largest games in the series “Assassin’s Creed IV: Black Flag,” saying that Ubisoft basically took the map from that game, and put land where there used to be water, to deliver the largest and most ambitious setting in the series’ history.

Players can explore rural areas of Egypt such as Siwa, the village that Bayek is from, or Alexandria, a massive and advanced city overflowing with Greek influence. And Ismail’s statement by no means suggests that there is no water in Egypt.

“Origins” presents players with a lot of freedom when it comes to taking a dip. Players can dive under water to explore the lakes and rivers, the ruins or capsized ships, or just absorb the view. Watch out for hippos and crocodiles, though. 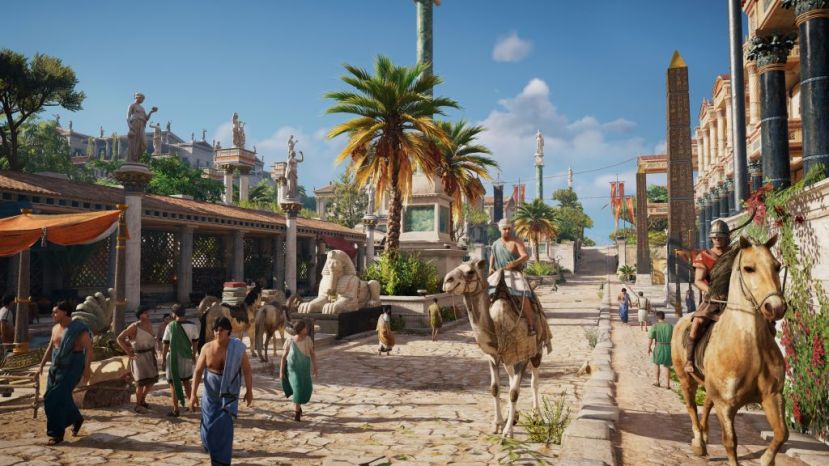 I play “Assassin’s Creed” games until I get tired of them, which only even mildly happens. But, now that Ubisoft has brought back many of the aspects that made all of the other games great, plus added another layer of R.P.G. on top of it, it’s going to be a very hard game to put down.

Ubisoft has released an “Assassin’s Creed” game annually since 2009, with last year being the only exception. Ubisoft decided to take a step back from the series last year, evaluate what makes it great, and put all those efforts into making one amazing game, versus two sub-par games.

The only complaint I have about the game is the scenes that follow the assassination of a major target. The assassins have always spoken to their targets as the life leaves their bodies, but they are lying down and are obviously dying. In “Origins,” the player can air-assassinate a target, only for there to be a scene afterward in which Bayek kills the target in a different, scripted way. I feel like this pulls the player out of the immersion of the game, and it just doesn’t make a lot of sense to me.

“Origins” is the best “Assassin’s Creed” game to come out since 2013, which made it well worth the wait.

“Assassin’s Creed: Origins” is a strong contender for Game of the Year, and I give it a 10 out of 10.