The South Plains College Livestock Judging Team continued a pattern of placing in the top three at their most recent competition.

The team competed on Oct. 26 and Oct. 27 in Kansas City at the American Royal Livestock Show. They placed second overall and earned Reserve Champion out of 32 teams, scoring 4,555 out of a possible 5,000 points.

Four SPC students placed in the top 25 out of 150 competitors.

As a team, they placed second in Oral Reasons, second in sheep and goat judging, and fifth in swine judging. 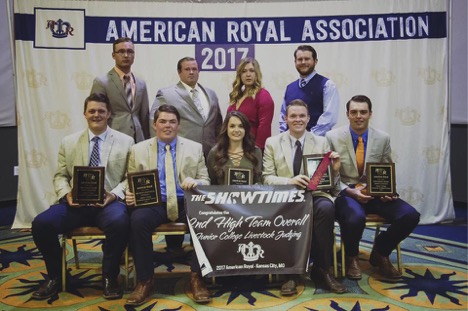 Conner Newsom, coach of the SPC Livestock Judging Team, said his team spends “30 to 40 hours the week before competition” practicing and preparing for the event.

The Livestock Judging Team has placed in the top three in each of their competitions this year. Newsom said the reason for the success is, “hard work, dedication, and commitment. Those three things encompass, and a little bit of luck, as much as anything help us fall right.”

The SPC Livestock Judging Team will be competing next at the North American International Livestock Exposition on Nov. 14 in Louisville, Kentucky.