One student at South Plains College is trying to change the world one cell at a time.

Roberto Mendóza, a sophomore from Fort Worth, says his initial major was pre-law when he enrolled at SPC, but found his calling when he took his first biology class.

“Something about [the class] made me want to switch entirely,” says Mendóza. “That’s been my driving passion.”

Mendóza, who graduated from Denver City High School, switched his major to cell molecular biology for pre-medicine, which is the study of molecules and how the cell works. He is currently part of the Plains Bridges to the Baccalaureate Program through Texas Tech and applies his knowledge of cell molecules through his current research.

“Right now, through the Bridges program, I’m doing cancer research, and it implements a lot of the cell molecular side,” explains Mendóza. “Some of the research I’ve been doing is on breast cancer and seeing some motility and shifts inside skeletal proteins to see how that cell metastasizes through the whole body, and see if we can mathematically predict that.”

Mendóza has been part of the program for five months. He says he heard about the program through one of his professors, Dr. Laci Alexander.

“I took her chemistry class,” says Mendóza, “and we typed out one of these papers talking about ourselves, and I said I wanted to do medicine and she wrote, ‘You should really consider being part of the Bridges program.’”

Mendóza became interested in the program, so he looked further into it, applied, and was accepted. The Bridges program accepts 10 to 15 students, on average, who do research during the summer.

“Essentially, they set interviews with professors or physicians over at the Health Science Center or the Texas Tech campus,” explains Mendóza, “and you get interviewed to see what you’re interested in, what kind of research you’ll be interested in that might relate to your field. Depending on the professor, you might be more on the writing side, or you might be contributing to the project.” 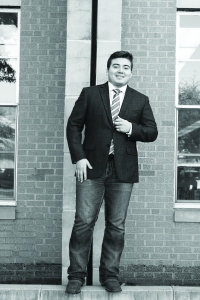 Mendóza interviewed with multiple professors and initially wanted to do something with neuroscience, which was leading him to join a professor’s lab that was working on Alzheimer’s Disease.

“When I was interviewed by Dr. Lauren Gollahon with cancer research, something sparked,” says Mendóza. “I liked it when she was explaining it to me. It was a lot of work, because you’re working with grad students and doctors. I personally had to bust my butt and read a lot. I had stacks of scientific papers and try to catch up and try to get a lot of knowledge they already had before I could really contribute anything to the overall project and conduct my own research.”

According to Mendóza, his part of the overall research was mathematically predicting the spread of cancer when the skeletal proteins in the cancer cell change.

“[The research] is part of a bigger project that they’re working on with a compound called NI-07,” says Mendóza, “which comes from a natural herb, and it’s known to be causing apoptosis, which means just killing the cells. If we can somehow predict when that cell is going to metastasize, and then just put the medicine on there and stop it from doing that.”

Mendóza says research was conducted during the summer, and the project was presented at two conferences, the SACNAS conference in Salt Lake City, Utah, and at the ABRCMS conference in Phoenix, Arizona.

“You just present your research, get judged, and you get to win awards,” explains Mendóza. “But the main purpose of it is networking. Because there are so many professionals over there, senior scientists, doctors, all kinds of people over there and you want to socialize and network to see what Ph.D or MD programs that are available, whatever it might be. Just to learn more of other people’s research to see if you can implement some of that into your own. There was a ton of cancer research, and there were some methods I could implement into my own.”

Mendóza plans to transfer to Texas Tech after earning his Associate’s Degree at SPC after this semester. His involvement with the Bridges program has challenged him with managing his time and making sure to not procrastinate.

“For anyone who is interested in pursuing a career in STEM,” says Mendóza, “one of the biggest challenges is sticking to it, because…it’s hard. It’s hard discipline in any field, such as engineering, to science, to mathematics, whatever it is. You have to stick it through and find ways to make yourself unique in order to be competitive in that field, and the Bridges program is one of those ways.”