Former addicts recently shared their stories and experiences with students to help inform and empathize with those who need it.

“Ask an Addict,” a program offered by the Health and Wellness Center at South Plains College, was created for students to be able to anonymously ask questions regarding drugs and alcohol, or ways to help someone they may know who is struggling with addiction.

“An event like this could help someone feel not so alone,” said Straface.

Those speaking at the event held on Feb. 20 in the Sundown Room of the Student Center have had to deal with an addiction in some way or form.

A couple from a nation-wide clean and sober motorcycle club called the “Alternative MC”, Shelly and John Haney, also known as “Edge” and “Gizmo” spoke about their addiction and how they got to the place they are now.

Addiction is a hard thing to deal with but also recognizing that you have an addiction is an even harder thing to accept, according to Shelly Haney.

Being a part of the “Alternative MC,” John and Shelly have learned to support people who have addictive personalities and show them where and how to get help.

“If we can help one person, if one person can be reached, leaving with some type of knowledge about resources or recovery, then mission accomplished,” Shelly Haney said.

After going through things that some people can’t even imagine, the Haneys wanted to share what they have learned through the years and what each of them has been through. 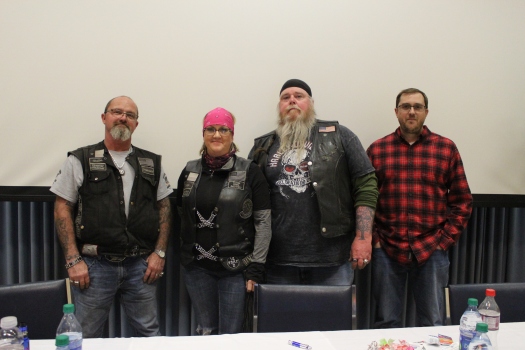 John Haney said he has dealt with unimaginable things. But now that he knows there is a solution and a way out by staying sober and helping, he feels that he has a purpose to life. He said that he has learned how to live.

A frequent question that is asked is “How do I know if I am an addict?” John and Shelly explained that there are a lot of factors that go into deciding if someone is addict. A lot of it has to deal with the person deciding for themselves.

“I can’t put that on anyone,” Shelly said. “They have to decide for themselves.”

Both John and Shelly say that they had to figure out and decide for themselves that they had a problem. Sometimes it takes going through some consequences to see that there is a problem.

Shelly said that she started drinking at the age of 12, before moving on to drugs at 29. She said that she abused substances to help her cope with her life and the world around her. But she let the students know that drugs and alcohol are not the only coping mechanisms available.

Shelly was 33 years old when she lost everything she owned, eventually causing her to move back to Lubbock. It was a friend who was in recovery who took Shelly to an Alcoholics Anonymous meeting that helped her see that maybe she had a problem

John explained that he began using drugs at the age of 6 and didn’t get sober until he was 29 years old.

“It consumed my life and everything about it,” John added. “Every penny. Every thought. Everything I ever did was to get high and forget the way I was feeling.”

Students may not know that there are options and resources available to them if needed.

“Let them know that they have a choice,” said John Haney. “That there are people here that are willing to help.”

At the end of the spring semester in 2017, Rick Herbert, professor of psychology at SPC along with several faculty members and Nick Castillo, campus police chief, and some of the Health and Wellness staff, formed an Alcohol and Drug Committee to provide resources that maybe students weren’t getting before.

After deciding that “Ask an Addict” would become an event, the first people who came to Herbert’s mind were John and Shelly, who he met in a motorcycle club.

“They are the most personable and relatable people I know of that are in recovery,” Herbert said. “I thought that they would be the best at connecting with the students.”

Herbert says that he struggled with addiction while in college. What seemed like just having fun turned into something more serious.

“What may seem like harmless college-aged partying can be the first steps down a road that can be really dark and lonely,” Herbert said.

The first time Herbert tried to attend college, he got kicked out. But that wasn’t enough for Herbert to see that there may be a problem. He continued to party.
“It wasn’t until much later that I really hated the person I had become and got clean and sober,” said Herbert.

Eventually, everything in Herbert’s life was centered around getting drunk and high. He was diagnosed with Hepatitis C from sharing needles. After that, Herbert knew his lifestyle needed to be changed.

“That was a good motivator to change,” Herbert said. “I was ready to do something different.”

“There is an incredible resilience in human beings,” Herbert said. “We can bounce back from almost anything if we get the right help. No one is never so broken that they can’t be whole again.”

Tagged as: Ask an Addict, News