Comics, videogames and memorabilia are things that a pop culture fanatic can find at gaming or book stores. But in Lubbock, these items can be found at one event.

Lubbock-Con, a two-day event hosted at the Lubbock Memorial Civic Center, allowed guests to experience different aspects of nerd culture and vendors to sell many of their geeky wares.

Lubbock-Con, which was held on Feb. 24-Feb. 25, is an annual gathering that gives locals an opportunity to celebrate their love of pop culture, gaming, and cosplay. Since starting in February 2016, Lubbock-Con has grown to accommodate more vendors, special guests, panels and contests.

Through this event, Lubbock residents and people from nearby cities get experiences that were only accessible at far-away conventions, such as San Diego Comic-Con and PAX. Guests get to meet icons of nerd culture, learn of different fandoms and interact with people of similar interests without having to travel great distances.

After hearing about the convention on the radio, Michael Gaines, a first-time attendee of Lubbock-Con, came from Amarillo to experience something new.

“I hope to see some stuff that I haven’t seen before,” said Gaines.

The convention is one thing that Gaines said is beneficial for people who do not usually get the opportunity to express their interests.

“It allows people who are interested in certain subsets of pop culture to mix and match with other people of similar interests, that they may not meet in other areas,” said Gaines.

With Lubbock-Con being convenient for area residents, opportunities to buy quality collectibles or to show off one’s cosplay are now easily accessible. This event offers experiences that people may not have been able to obtain before.

After roaming parts of the convention, Chase and Catherine Olivier, first-time guests, said they were exposed to new things that they really enjoyed.

“We enjoy games and fun stuff anyway,” said Catherine Olivier. “It doesn’t matter what you are nerdy about. There’s definitely something here that you can be excited about.”

Being able to see all the items that were offered was one thing that Chase Olivier liked about his first time at the convention. 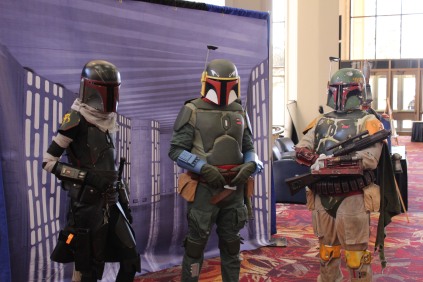 “Seeing all the cool merchandise that they have here,” said Olivier recalling his favorite part of Lubbock-Con. “Especially the artists. They have some really talented artists out here.”

The many collectibles, games, and art pieces are a big part of conventions. Many people crowd around one table just to look at the variety of merchandise that a vendor has to offer.

The amount and the type of merchandise are factors that vendors need to consider when selling at conventions.

Matt Martinez, a vendor for Star Comics, says there is a lot of preparation that needs to be done before selling items to Lubbock-Con attendees.

“It’s just rounding up a lot of things that we have in store,” said Martinez. “It’s really just considering who all is going to be at the convention and serving that group.”

All the preparation and work at Lubbock-Con were things that Martinez said he hopes will benefit business.

“It lets the people know that we’re here,” said Martinez regarding the convention. “We’ve been at Lubbock-Con since its inception. We’re here to serve you, your comic book needs, your collectible needs.”

Exposure at conventions is something that vendors strive to obtain for their business and wares.

Danny Kochis of Bolt-Designs says that he wants to show off his wares at Lubbock-Con and tell guests of what his t-shirt business is all about.

“You try to get a wide variety of merchandise,” said Kochis. “I hope to expose a lot of people to my product, my service, and my art.”

Whether it is the merchandise or the opportunities to meet new people and learn of different fandoms, Lubbock-Con offers experiences for all guests and vendors.

This event is a place where many people with different interests in pop culture have continued to gather during the few years the convention has been held.

Evan Rogers, a frequent guest of Lubbock-Con, said he enjoys that the convention acts as an outlet for him and his friends to immerse themselves with nerd culture.

“I think it’s something that we all like to gravitate towards, and we just like to hang out with friends,” said Rogers, regarding convention experiences. “I think that’s really what brings everybody together here at Lubbock-Con.”

During the past few years, this convention has grown to allow more people to take part in the festivities.

“I’m really happy to see that Lubbock-Con has been really successful for the last two years,” said Rogers. “It seems to be the little gem that’s out in the oasis here.”