The event was held Sept. 20 – Sept. 22 in Portales, New Mexico at the Lewis Cooper Rodeo Arena.

Sophomore Britton Bedke placed fourth in Tie Down Roping, recording an 18.8 average after a run of 9.7 in the long round. Bedke finished with 110 points. Freshman Hayden Cloward qualified for the short round, after a time of 10.7 in the long round. But Cloward was unable to score in the finals, finishing ninth overall.

Freshman Dawson Stewart placed fifth in Steer Wrestling. Stewart finished the rodeo with a total of 50 points. He had a time of 5.3 in the long round, and a 4.8 run in the finals, averaging 10.1.

Sophomore Cody Huwa and NMJC’s Luke Skocdopole placed fourth in Team Roping with a 5.1 run in the finals, averaging 13.6 overall.

Freshman Grady Quam paired up with Cisco’s Paden Bray, and the duo placed fifth in Team Roping. They posted a 6.9 run in the long round and an 8.6 in the finals, finishing with an average of 15.5 and a total of 50 points. Sophomore Stefan Ramone and former SPC rodeo team member Jhett Trenary finished seventh with an average of 105.7.

For the Lady Texans, freshman Elle Eagles finished eighth in the Goat Tying finals with 15 points. She posted an 8.2 in the long round and a 9.7 in the short round for an average of 17.9. Eagles also competed in the finals in Barrel Racing after a 17.97 run in the long round. She ran a 28.56 in the finals, ending the rodeo with an average of 46.53. She finished 10th overall. 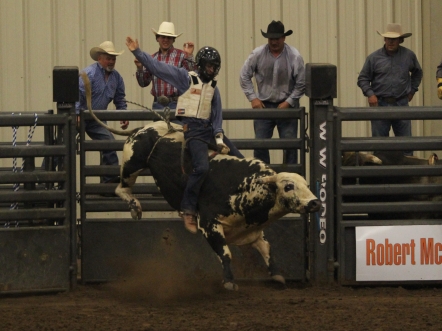 The event was held Sept.14 – Sept. 15 at the Mallett Event Center in Levelland.

Chet Boren, a national finalist in steer wrestling when he was at SPC, placed second in that event. Boren also competed in team roping with K.C. Curtis, assistant Rodeo coach at SPC. The two placed second with a time of 4.710.

The South Plains College men’s and women’s rodeo team competed at the Sul Ross State University Rodeo in Alpine on Sept. 27 – Sept. 29. Results were not available at press time.