In the dystopian futuristic city of New York, one man feels that his purpose of saving the world is dawning.

The new Netflix original limited series, “Maniac,” tells a story of what could become our future. “Maniac,” created by Patrick Somerville and directed by Cary Joji Fukunaga, is based on the Norwegian television series of the same name.

The series follows Annie Landsberg, played by Emma Stone, and Owen Milgrim, played by Jonah Hill, two strangers drawn to the late stages of a pharmaceutical trial, each for their own reasons.

Annie is fixated on broken relationships with her mother and her sister. Owen, the fifth son of wealthy New York industrialists, has struggled his whole life with a diagnosis of schizophrenia.

Neither Annie’s nor Owen’s life has turned out typical and happy. A new radical pharmaceutical treatment created by Dr. James K. Mantleray, played by Justin Theroux,  promises to repair anything about the mind, whether it is mental illness or heartbreak.

Neberdine Pharmaceutical and Biotech draws Annie, Owen and 10 other strangers to their facilities for a three-day drug trial that will, they’re assured, solve all of their problems, permanently, with no complications or side-effects whatsoever.

In contrast to this seemingly advanced society, it’s running on some old technology. The PCs in an office building look like desktops from the late 1980s. Landline phones with large buttons are installed in city apartments, while billboards speak their pre-recorded promotion to passers by, the images appearing on rotating panels rather than flashy LED screens.

Additionally, in this future there are odd jobs/services that appear, such as an AD buddy, and Friend Proxy. An AD buddy is a form of payment that allows users to obtain goods and services by letting an actor recite ads directly to them. Both Annie and Owen use AD buddy when they are low on funds, which is what draws them to the trial. A Friend Proxy can be hired to be used as company when a person is lonely or feeling down.

The first few episodes focus on telling the stories of who Owen and Annie are in the world. The series starts off with Owen seeing an imaginary brother named Grimsson, who looks like his brother Jed with a moustache, both played by Billy Magnussen. Grimsson keeps reminding him that he is on an important mission and that he will save the world soon. 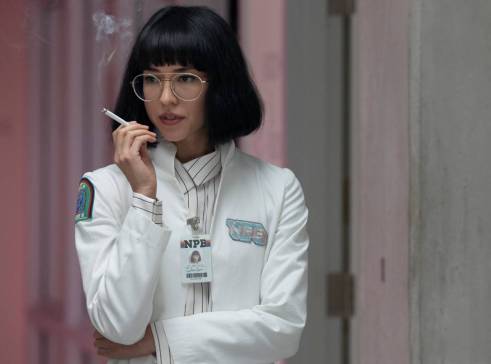 Meanwhile, his family is protecting Jed, his actual brother, from accusations of sexual misconduct. Owen is planning on defending him by claiming to have witnessed the event. He is fired from his job and refuses his father’s offer of working with his company and his money. He hears about Neberdine and signs on to test their new drug to earn some money.

While there, he meets Annie, which he has been hallucinating in advertisements before he even met her. Grimsson explains that she is the agent he needs to see. After speaking to her, Annie confirms her association to him, but tells him not to “blow their cover.” Owen complies and prepares for the trial. Owen feels that this is the beginning of how he is meant to save the world.

As they begin testing, they are taken to where they will stay for the duration. The room looks like something out of an ‘80’s science fiction movie. There are pods for them to sleep in and a table to have meals at, with screens above the table to inform them of when testing is. From the color scheme to the computers, you can’t put your finger on if it is the past or not.

The participants of the trial take a series of tablets, the A, B, and C pill, and are hooked up to a supercomputer, named G.R.T.A., voiced by Sally Field. G.R.T.A. has artificial intelligence and controls the simulations that the participants go through. The trial room looks similar to the rest of the trial area and the general feel of the show. There are chairs around the room, facing a control room, with each having two microwave plates on the sides.

The trial begins with the A pill, which stands for Agonia, which means “struggle” in Greek. The A pill’s effects are the most tangible. The pill is meant to reveal the patient’s most raw and significant trauma that has shaped his or her life. Before the computer begins the simulation, Owen throws his pill across the room. He doesn’t take the pill, because if this is his mission, is he really supposed to participate?

In Annie’s vision, her and her sister Ellie, played by Julia Garner, are traveling to Salt Lake City, where Ellie’s fiancé lives. Annie behaves almost cruel toward her sister the entire time. The vision shows why Annie has struggled during her life. Her regret has destroyed her.

The next pill, B, stands for behavioral. After identifying a participant’s source of trauma, G.R.T.A creates a personalized pill meant to bulldoze his or her defense mechanisms. This is when the experiment starts to go off the rails. The hallucinations of Annie and Owen become intertwined, which isn’t supposed to happen. They experience two sequences together. In the first, Annie and Owen are reimagined as Bruce and Linda, a happily married Long Island couple. Annie convinces Bruce to track down a lemur that belonged to a dead patient of hers. In the second, Annie and Owen are estranged spouses and con artists trying to track down a missing chapter of “Don Quixote” during a 1940s seance.

The final pill, C, stands for confrontation. A and B pills are about acknowledging trauma, but the C pill is about moving on. A lot happens during this pill, and it is shown over several episodes. When the simulation begins, Annie is a half-human, half-elf guiding the ailing elf Ellia towards healing waters. Owen is watching Annia and Ellia’s elven journeys on a TV show.

Owen is a gangster with braids being pressured by his father to be loyal to the family, even if it means committing crimes. Owen also connects with Olivia, played by Grace Van Patten, his high school crush in the real world. Years after running away from his family and marrying Olivia, Owen awakens to realize he’s living in a simulation and needs to track down Annie, intertwining their simulations again.

The C pill has tangible effects on Annie and Owen. Annie is able to talk to her sister and finally process her devastating loss. Owen is able to realize that his family is terrible, more or less, and it’s not worth lying on the witness stand for his brother in the real-world trial.

The series is a mix of retro science fiction and a dystopian future we might soon face. It was incredibly well written and filmed. Each episode, although having different plots, flowed perfectly together. I give “Maniac” a 10 out of 10.