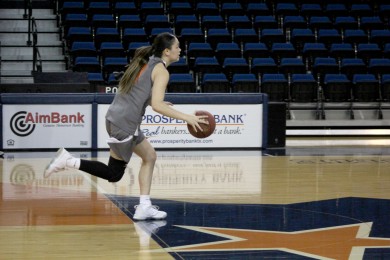 The Lady Texans, ranked No. 15 in NJCAA Pre-Season Poll, improve to 3-0 after a 56-38 victory against Mesa Community College on Nov. 3 at the OC Sports Center in Odessa.

Sophomore Kiki Hunter grabbed her third consecutive double-double of the season, hitting six of her 12 shots from the field for 13 points and grabbing 11 rebounds. Freshman Ruth Koang also chipped in 13 points, hitting five of eight shots from the floor to go along with six rebounds.

Freshman Oceane Robin hit three of her five shots, totalling eight points, while freshman Caroline Germond tossed in seven points to go along with three assists and three steals. Sophomore Chantel Govan added six points for the Lady Texans in her 33 minutes on the court.

SPC shot 39.7 percent from the floor, including 10 points off of 14 forced turnovers. The Lady Texans put up 34 points inside the paint and pulled down 36 rebounds.

The SPC women’s basketball team grabbed their second victory of the season on Nov. 2 against Colorado Northwestern at the OC Sports Center in Odessa.

Hunter posted her second double-double, popping in 24 points and grabbing 17 rebounds, while helping the Lady Texans to an 82-23 victory.

Hunter hit 10 of her 16 shots from the field to go along with four blocked shots and three steals. Freshman Sarah Shematsi went seven-for-16 from the field, finishing with 17 points and two assists.

Koang hit six of her eight attempts from the floor, adding 12 points and grabbing eight rebounds, while Germond put up nine points and four rebounds.

SPC shot 50 percent from the field and played a tight defense, allowing only six points in the first half, including no points in the second quarter.

The Lady Texans started off the season on Nov. 1 with a 75-59 victory against Tohono O’odham Nation at the OC Sports Center in Odessa.

Hunter recorded her first double-double of the season, as she shot 6-for-9 from the field and was 4-for-5 from the free-throw line, totaling 16 points. Govan put up 13 points to go along with three assists and two steals, hitting four of 10 shots from the field, with two three-pointers.

Robin added 12 points with three assists and two steals, while freshman Romola Dominguez added 10 points with four assists, going 4-for-10 from the field.