Every city on Earth has been all but destroyed, with the exceptions of Iron City and the floating city of Zalem directly above.

It is the year 2563, and a cataclysmic war between the people of Earth and the “United Republic of Mars,” coined “The Fall” or “The Great War,” has left Earth in ruins. 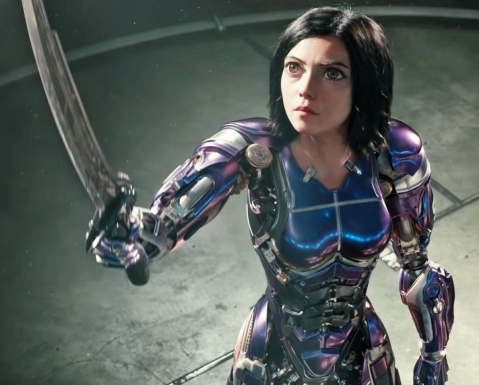 Cybernetics and robotics are part of daily life in a place called Iron City. It has a giant scrapyard in the center, which is supplied Zalem. Zalem is the last floating city on Earth, where only the elite can live. Zalem dumps all of its junk, including damaged cyborgs, down on to Iron City. Iron City inhabitants live a mostly subservient life to those on Zalem, with a large factory that produces and ships parts and goods for the floating city.

Alita is a cyborg that was found in the scrapyard by Dr. Daisuke Ido, who is the best engineer in Iron City. Ido is originally from Zalem, and he was sent down to Iron City after his daughter, who was also named Alita, was diagnosed with a rare disease.

Ido repairs the amnesiac Alita by giving her the body he created for his daughter. Later, through her muscle memory of a lost fighting technique, she experiences flashbacks of her past and starts hunting answers.

The Factory is operated by a sort of criminal conglomerate, led by a man named Vector. Vector makes the factory and himself money through a game called “Motorball” and other criminal activities. Motorball is a gladiatorial racing game. The only rule seems to be “get the ball in the hole” at the end of a large, concrete track. Motorball players are typically cyborgs or humans in an exo-suit, equipped with special racing gear and weapons to fight off opponents. There are no teams.

Many people in Iron City have cybernetic enhancements. It is not uncommon to see a normal-looking human with two robotic arms that are specifically engineered for an occupation. Many humans exchange their own body parts for robotic upgrades in an attempt to live better lives. People with interchangeable body parts face certain risks, however.

The criminal conglomerate that runs and oversees “Motorball” and the factory hires young criminals to poach valuable body parts from the citizens of Iron City. Vector hires a young man, Hugo, as one of his poachers with the promise of sending him to Zalem after he pays Vector 1 million credits.

Additionally, the big, bad, “Nova,” who lives in Zalem, collects body parts of the people he admires. The world Alita lives in is truly a dog-eat-dog world, where the strong prey on the weak.

“Alita: Battle Angel” brings a beautiful, rugged landscape to a post-apocalyptic Earth. Even the “Badlands,” which is the area outside of Iron City, is a beautiful natural scene with a handful of the terrible reminders of war that had once torn the land.

Most of the movie was filmed in Austin, Texas. A gorgeous scene of The Badlands features some of Texas’ beautiful landscape.