On first day of October in 1989, suddenly 43 women give birth to gifted children. But none were pregnant when the day begin.

Once again, Netflix surprises with a new movie based on a comic book, “The Umbrella Academy.” The adaptation of a comic novel, “The Umbrella Academy” by Gerard Way, the vocalist and co-founder of the rock band ‘My Chemical Romance,’ and Gabriel Bá, is a classic story of superheroes trying to save humanity from an apocalypse with a little bit of family drama.

The series starts with the reunion of the superhero family after the father Sir Reginald Hargreeves (played by Colm Feore) is announced to be dead.

Sir Reginald Hargreeves is a philanthropist and a very wealthy inventor who adopted seven of  thoses 43 children and raises them to basically save the world.

The story shows how Hargreeves was more focused on the children’s powers and only caring about the results that they could bring, instead of caring for them as children. His inability to get involved in the kids’ lives is evident when he does not even take time to name them. That leads the kids to grow up to be dysfunctional and psychologically damaged heroes.

The characters have a pretty strong presence of the heartless father in they lives, but they also had two nurturing figures to count on in Mom, played by Jordan Claire Robbins, and Pogo, voiced by Adam Godley, a super intelligent talking chimpanzee and loyal server to Sir Hargreeves. 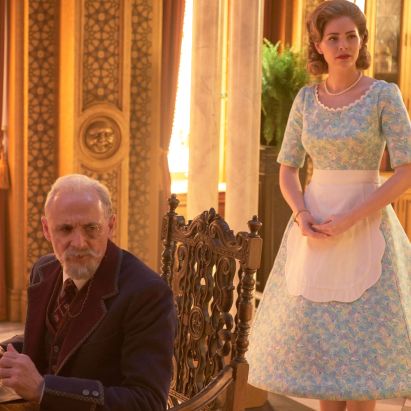 The characters have unique powers and life experiences that are shown in the development of the episodes. Number 1 is Luther, played by Tom Hooper, who has superhuman strength. Number 2 is Diego, played by David Castañeda, who has the ability for super-precise knife combat and also can breath underwater. Number 3 is Allison, played by Emmy Raver-Lampman, who can manipulate a rumor to become reality by speaking. Number 4 is Klaus, played by Robert Sheehan, who has the power of telekinesis and can levitate. He also can posses and talk with the dead. Number 5, played by Aidan Gallagher, is the only son who was not given a name. The reason that he got stuck in a different period of time during time traveling, and when he finally came back, he is stuck in his 13-year-old body.

Number 6 is Ben, played by Justin H Min, whose power is to have many layers of skin. He died at a young age but is present in the series through interaction with his brother Klaus.

Number 7 is Vanya, played by Ellen Page, who is the mysterious piece of the Umbrella Academy. She is the ordinary child of her superhero family.

Other characters who add a lot of action to the show are the time traveler hitman, Cha Cha, played by Mary J. Blige, and Hazel, played by Cameron Britton. They bring extra mystery to the show that is developed and explained during a few episodes, which make it more interesting. As the show progresses, you start to see the reason the characters are present.

A lot of the series happens afters years of the separation of the family. During the reunion, there are flashbacks to childhood experiences. Also, the siblings attempt to reconnect as a family after the father’s death. It show how their personalities end up creating conflicts while trying to prevent a global apocalypse.

One of the aspects that makes the series very engaging and entertaining is not only is it about superheros, you can find a lot aspects of crime, science fiction, romance, and mystery in many of the episodes.

At first, the series did not look extremely exciting, since the first episode starts a bit slow. But before the episode ended, they definitely got my attention and made me ready to see what else was to come.