Danny Vest has spent many hours driving hundreds of thousands of miles for students at South Plains College.

He recently retired after 35 years of service as the transportation director. He started working for SPC in 1984 and was employed at the college until August 31, when he officially retired.

A Levelland native, Vest attended junior high and high school in Levelland before enrolling at SPC. While he was an SPC student, he served as the manager for the men’s basketball team. After he graduated, SPC had gotten new “people carriers,” according to Vest, which is another term for bus, and the position for full-time bus driver became available, so he applied for the job.

His favorite memory was when he had the opportunity to drive the Dallas Cowboy Cheerleaders. They came to campus one year, and he had the privilege of picking them up from the airport and driving them to their destinations.

Vest considers his most memorable moment while working at SPC to be when the men’s track and field team won 11 consecutive NJCAA Outdoor National Championships.

Being the bus driver, Vest had the chance to go on multiple trips with many SPC organizations. He drove the students in the Upward Bound Program every summer and went to many places such as Colorado, Ruidoso, N.M., San Antonio, and Austin. He also was able to go to Florida with Country Caravan, which was a band of college students and professors who performed free concerts while traveling around Texas and other parts of the country. 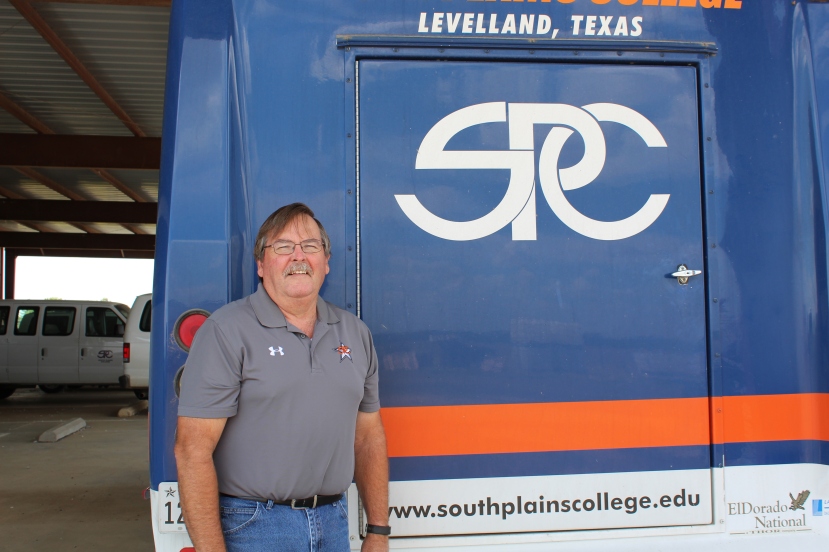 According to Vest, his trip mileage with SPC is about 750,000 miles.

There are a few SPC organizations that are sad to see him go, but wish nothing but the best for him as he starts the new chapter of his life.

As of now, Vest doesn’t have any plans for the near future, but hopes to one day visit Alaska, since it is the only state that he has not been to.

“I actually just thought that it was a good time to just do it now,” says Vest explaining why he chose to retire.

Vest said he is very thankful for South Plains College for the numerous opportunities he had while working here. He made many lifelong friends and intends on keeping those friendships throughout his retirement.