The Dynamic Duo had their first encounter with the Scarecrow several years ago and beneath that case was a much larger mystery that only Batman knew about until now.

In the comic “Batman & Robin Eternal, Vol. 1,” Dick Grayson, Jason Todd, and Tim Drake, all past partners of the Dark Knight, begin to be targeted by an assassin known as the Orphan.

Dick Grayson was the first Robin, formerly Nightwing, and is now an international superspy, Agent 37.

Jason Todd was the second Robin. Killed by the Joker, Todd has since been resurrected and now fights crime as the pistol-wielding Red Hood.

Tim Drake was the third Robin. Drake actually met Grayson at the circus and subsequently saw Grayson’s parents die, to later see Grayson being consoled by Batman. Drake followed the stories about Batman and Robin for years and later donned the Robin suit to save Batman and Nightwing from Two-Face at only age 13. Drake now goes by the moniker Red Robin and has a full array of tech gadgets that he’s invented or built himself.

The Robins are also joined by Cassandra Cain and Harper Row. Cain is Orphan’s daughter that he molded into a human weapon by forcing her to watch him assassinate people and keeping her locked away from the rest of the world. Harper Row is a vigilante that goes by the name of Bluebird. She was never a partner of Batman’s but she tries very hard to be that.

With Orphan on their tails, the former Boy Wonders must join forces to untangle a mystery that goes back to the early days of Batman’s and Robin’s careers.

Several years ago, Batman encountered Mother while investigating a case related to Scarecrow. Mother is a human trafficker that has a child’s parents killed and then takes them to raise them however she sees fit. She believes the children have to experience trauma to be able to be molded into what she wants, which is why the parents are murdered. Although, towards the end of the comic it is revealed that Mother is experimenting with a new way to make these children vulnerable that does not require any type of trauma but only Scarecrow’s fear toxin.

The comic switches back and forth between Batman and Robin’s first encounter with Scarecrow, and the present where Bruce Wayne is retired and all of his former superhero allies are working on a case so dark and deep that only him and Cain knew about it until recently. 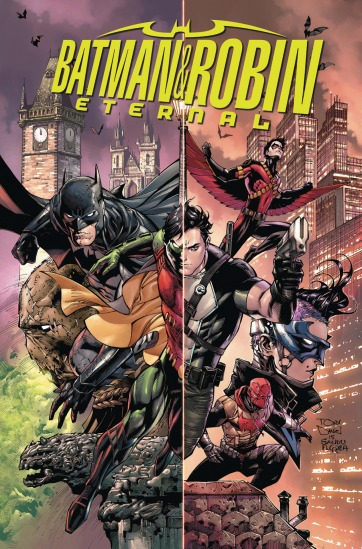 With Wayne retired, Gotham is patrolled by a robotic, GCPD-sanctioned Batman. Wayne’s former partners could really use the real Batman right now, but they share too much compassion for their mentor to bring his new carefree lifestyle to a halt, and he has trained them all very well. As long as they do not underestimate Mother, they can handle her…

This is by far one of my favorite Batman stories. It’s so well written and so well drawn. The banter between the former Boy Wonders is laced with comedy and so much of the brother dynamic. It’s great to see how each Robin’s skillsets interact and play off of the other, as well as their attitudes.