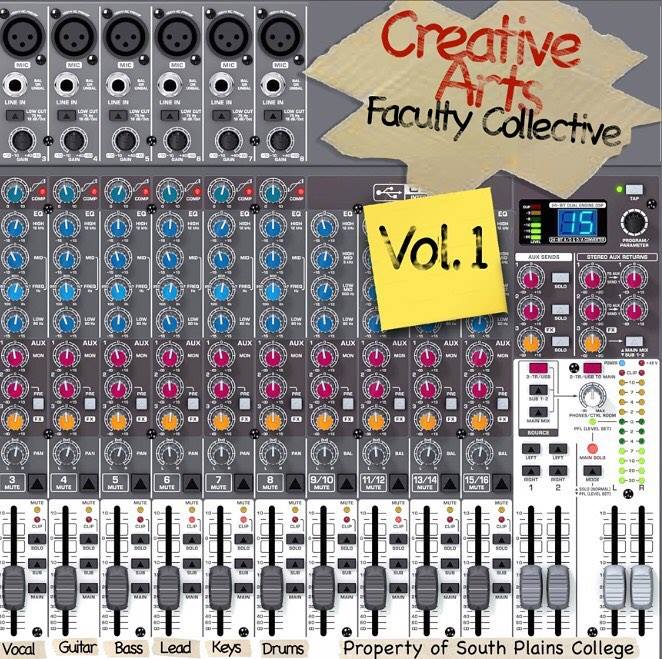 The Creative Arts Department at South Plains College is bringing a new sound to the Levelland campus, releasing a faculty CD.

Dolfo Guardiola, instructor in sound technology, is one of the faculty members who took part in the production of the CD, engineering three of the songs, along with mastering and recording it.

The idea of the CD is to showcase the talents of  Creative Arts faculty. Each faculty member composes every song. Some wrote the music but didn’t actually play on the song. Ed Marsh, professor of commercial music, wrote “El Moto,” an instrumental piece that the faculty plays on. The Sound Technology Program, with instructor Chris Neal, engineered and composed a song that other instructors play on.

Guardiola says, according to Brent Wheeler, assistant professor of commercial music at SPC, a lot of professors at universities have to publish to continue to teach, and this is our version of staying published. Every other year, the Creative Arts faculty produce a collaboration CD to show everyone that this is what they can and highlight their skill level.

Guardiola says that creating a CD takes quite a bit of time and energy. The most difficult part about it all was the scheduling. During the week, it was pretty hard to rehearse each song or record because of classes, so the producers tried to manage schedules to work out either in the evening or on weekends to do only recording. The faculty members who contributed to the album even worked during the summer break and even during the Christmas break. Most instructors on the weekends have their own gigs, causing the faculty to usually work on the CD throughout the summer, Christmas, or in the evenings.

Wheeler, one of the main producers, get things together with the schedule and engineering. Brian Tate, instructor in commercial music, has also put in a lot of his rhythmic skills into this CD, while John Reed, bass instructor, played on several songs. Mark Wallney, one of the composers, had his own song that everyone plays on. Sonny Borba, Jay Lemon, Chris Hudgins, Greg Cook, and Emily Wheeler, were among other instructors involved. Paul Davidson, associate professor of design communications,  also was the designer and printer of the inserts for the CD case. He also designed the cover art for the CD. Greg Cook, video program coordinator, did the printing of the CD.

The CD, which features 12 songs, is $10, with the proceeds from each sale being donated to the competitive scholarships in the Creative Arts Department. The CD is on sale in the Creative Arts Building in the Levelland campus and also is being released in retail stores. It will be available on YouTube as well.