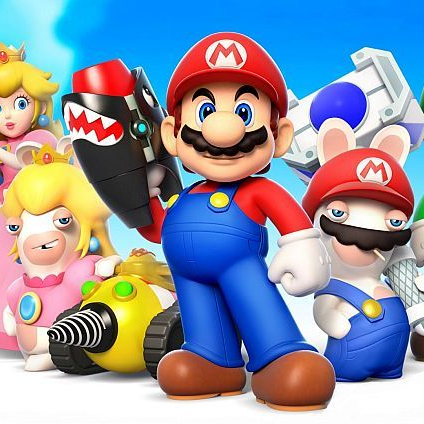 It’s a weird pairing that looks ripped straight out of a fourth-grader’s crayon drawing stuck to the fridge. But somehow “Mario + Rabbids Kingdom Battle” is now my favorite strategy game.

This game stars some of the most iconic video game characters in history, namely Mario, Luigi, Princess Peach, and Yoshi from their foundational series of Nintendo games that laid the path for an entire empire of gaming. But it also features the Rabbids, a group of goofy, deranged bunnies who originally appeared in Ubisoft’s lauded “Rayman” series before splitting off into their own games.

Yes, that means this game is a crossover of a spinoff, in a genre that neither of the individual IPs have ever attempted. But the culmination of the two is ultimately far greater than the sum of its parts.

For how simple “Mario + Rabbids” looks visually, the narrative has a much more complicated premise.

The opening cinematic illustrates a scene in which a robot AI named Beep-O and a young girl, who is an inventor and avid Nintendo fan, have created a headset called the SupaMerge. The headset works by combining two objects the user centers in its crosshairs. The only logical conclusion of this conceit follows, and suddenly a group of Rabbids has been summoned into their reality.

One of the Rabbids using the SupaMerge then unleashes the game’s chaotic backdrop by combining Rabbids with the girl’s Mario decorations, and a world of nutty antics and topsy-turvy scenery is born. 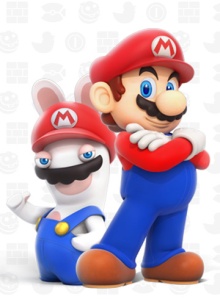 For those who have never played a strategy game before, the good news is that this is likely the best entry to the genre anyone could ever hope for. It’s simplistic, compared to big AAA strategy genre staples such as “XCOM,” but fans of those more complex games will likely still feel very much at home.

The meat of the gameplay occurs when your team of half-Mario/half-Rabbid hybrids stumbles across miniature battleground setups when progressing through the linear world maps. These battle encounters pit your team against teams of enemy Rabbids, with each battle assuming a unique layout featuring a different arrangement of obstacles for taking cover.

Each player on your team wields a different weapon that can be customized out of battle using upgrade points. The turn-based combat is an exercise in balancing gridded movement and ranged attacking. One character sees the number of spaces they can travel in a turn, and the player must make a judgement call about how far to move, and what to take cover behind.

A victory against an enemy team using intentionally planned actions, and seeing the last Rabbid blasted into an explosion of dissolving pixels, is one of the most satisfying game victories I’ve ever experienced. Weirdly enough, I can’t help but feel that on a certain level it’s making me a better, more deliberate problem solver every time I play.

The actual art design of the game is also worth mentioning, as I don’t believe there is another strategy game on the market with visuals as vibrant and adorable as this one. Even just walking around the world and solving the way-too-easy environmental puzzles is enjoyable when around every corner is a new way the Rabbids have corrupted the normally sleek and polished softness of the Mario universe.

The simplicity of the gameplay is reflected in the cartoon-like art style, which, combined with the familiar Mario character costars, could perhaps bring a whole new generation of players to the strategy genre in a fun, accessible way.