Family is the first thing people are born with. Many value it above everything else.

But family can also be something you choose, and that’s been the experience of the Lubbock Community Theater in putting on their newest musical, “The Addams Family.”

The show, which ran through October 15 at the Louise Hopkins Underwood Center for the Arts in downtown Lubbock, is an enormous endeavor for LCT. With a cast and crew of more than 40 people, it’s easily the theater’s largest show in many years, and the community has taken notice.

The show revolves around a family that is a morbid and irreverent spoof of the traditional American household: a wealthy but close-knit group of relatives who take pleasure in things that would normally disgust or terrify others, while oblivious to their outwardly frightening nature.

“It’s been an adventure,” said Heather May, the show’s director. “But with this show, it talks so much about family and inclusion, and being there for each other no matter what. I like to put that into all my casts, but especially with this one.”

For those unfamiliar with the musical incarnation, this story is not based on the television series, the string of feature films that followed, but on the feel of the original single-panel comic strips that cartoonist Charles Addams drew for The New Yorker for nearly half a century.

It’s a big concept, and putting on a play of this scale isn’t an easy task by any account. But community theatre, as many of those involved have confirmed, has a way of bringing people together.

“This production is truly a huge example of ‘community’ theatre,” said May. “So many people were like, ‘you need this, you need this, yeah, we can help you with that.’ A small theatre like LCT would not be able to put on as big a production without that support and those relationships and connections that we have through our community.”

The teamwork is just as strong within the ensemble cast, but there are some obviously fantastic standouts. Kayla Rushing’s Wednesday walks a fine line between sullen and energetic. Michelle Tarbox as Morticia dances endlessly throughout the show, but never relinquishes her air of mysterious elegance. Whitney Garrity as Fester narrates the show with an almost childlike innocence and unshakable delight, while Frank Rendon’s irreverently charming Gomez feels like the solid, comic glue that holds the entire family together.

Charlie Schwieterman, the play’s assistant director, says that sense of teamwork is an intentional part of the “Addams Family” process, and community theatre, in general.

Community theatre is a collaborative effort that often means putting in many hours a week after school and work during several months, to accomplish creative goals and put together a complete performance.

“My main job is my side thing,” said Schwieterman. “That’s what I do to help support what I do here.” 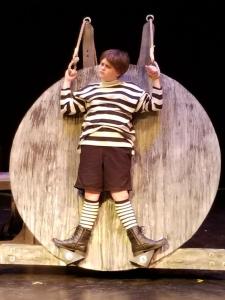 The musical tells a tale of growing up, as the brooding daughter Wednesday is now 18 years old and in love with a person the family just can’t accept or understand—an average, “normal” boy from Ohio. There’s singing, there’s dancing, and there’s even an adaptable set assembled a few pieces at a time by characters in the show as it progresses.

One of the hardest jobs, onstage at least, actually falls on someone audiences may not expect.

“I’m a named character that’s in the program, and I don’t say anything,” said Randy Cook, who plays Lurch, the family’s silent butler. “It’s the hardest role I’ve ever played. For me, it’s a great exercise as an actor. It’s all about listening and reacting, and absolutely not about me initiating any action on the stage.”

Overall, Cook says it’s a relatable story about a family more like the rest of us than it might first appear.

“You come at this thing from a real dark perspective with this really odd family,” said Cook. “But which one of us doesn’t have an odd family that has darkness in it? They just display theirs out in front of God and everybody.”