Survival. Most people don’t have it on their minds all of the time.

But now Switch owners can survive “The Flame in the Flood” anywhere they go.

In 2016, the indie survival game “The Flame in the Flood” was released to critical acclaim, and on Oct. 12 “the Flood” came to the Switch.

The “Flame in the Flood” has an isometric viewpoint, which basically looks like a merge between side-scroller and top-down, and moves the player through the game via a procedurally generated river. The player navigates the river with a raft that can be upgraded with found resources.

The protagonist that the players control in “The Flame in the Flood” is a girl called Scout, and she has a companion named either Aesop or Daisey, a boy or girl dog, who helps the player survive.

A vast number of games have a base aspect of survival, but games that are specific to the survival genre up the ante all the way. In “The Flame in the Flood,” players must monitor just about everything that goes into daily survival that many wouldn’t think about outside of gaming.

Players must forage for plants, catch their own meat, and scavenge for other supplies. You have to monitor Scout’s hunger, hydration, temperature, and sleep, which can be maintained by doing the basics of human survival.

If Scout gets hungry, you will need to use the supplies you’ve gathered to craft a snare, box trap, spear trap, fishing rod, or a bow and arrows.

Snares, box traps, and spear traps are best used to catch things such as rabbits, and when done, it can be kind of graphic.

You can also eat berries and vegetables that you’ve scavenged, but meat and veggies alike will spoil after a few days. I haven’t really delved into the survival genre too much, but I was surprised and delighted to see that the food had expiration dates.

Eating things that have expired, or meat that’s raw, will make you sick or give you parasites, while some foods have no nutritional value and could poison you.

Some wild produce, such as mulberries, cannot only provide you with nutrition, but also hydration.

Early on, the player will find a jar, which can be used to collect water, but most stagnant sources are dirty and will make you sick. The best way to collect water is from farms that have clean sources, or when it rains. But if it’s raining, you need to find shelter quickly so you don’t get damp and cold.

And if you get cold, you can get sick. So it’s also important to monitor your temperature, which can be done by crafting thicker gear from scavenged items, crafting a campfire (which is also a good way to cook meat) or by taking shelter and sleeping in a bus or at a farm.

But, sleeping is not only important for shelter. You actually need to sleep in the game. I’m not sure what the outcome of not sleeping in “The Flame in the Flood” is because it’s one of the easier things to keep up with, but I have reached the point of being tired a couple times.

If the player fails to maintain any of these aspects of survival, Scout will start to take hits to her overall health. When that runs out, the player will die. One of the strangest ways I’ve died in the game started with an ant bite.

I had just had a tussle with a hog, so I healed my scrapes up with a bandage and some aloe. If I had used two bandages and no aloe, I would’ve had aloe for the ant bite I received shortly after. But I didn’t have aloe, and I wasn’t able to find any, so I became septic. Then I couldn’t find any penicillin, so I died from an infection.

Dying from an ant bite is quite comical to have happened to me early on, but if it had happened to me later on in the game, I probably would’ve been annoyed because I would’ve had to start over. 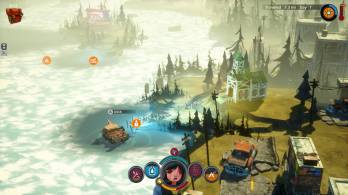 That being said, whether you’re playing in traveler mode, which has checkpoints, or survival mode, which has permadeath, it takes dying or starting over a couple times to start getting a handle on the game. It becomes a lot of fun once you start to get in a groove.

“The Flame and the Flood” is a great survival game and a fun game to play on the tv or on the go, although it is kind of hard to just hop in the game and mess around when you have some time to kill. This a great game to keep players busy while waiting for “Mario Odyssey” or “Assassin’s Creed: Origins.”