Attending college may have its challenges when being from a different country. But those challenges haven’t stopped Felix Kosgei from succeeding at South Plains College.

The Kenya native grew up in the small town of Eldoret. Before making the transition to the United States, Kosgei trained to earn a scholarship to attend SPC.

“I used to train back home, and we had a time tryout to quality for a scholarship,” Kosgei explains. “We had to run a 3k, which is 7 1/2 laps. SPC was trying to get athletes to run for the school. They were taking the best guys with the best times, and I ended up being one of the best.

Kosgei has been one of the best distance runners at SPC since enrolling in the fall of 2015. He doesn’t have a specific major, so he is majoring in General Studies. According to Kosgei, his first semester at SPC was a little difficult because of the language barrier.

“My first semester was really hard,” recalls Kosgei, “because whenever I went to class I could see and hear the professor, but I couldn’t understand anything because the language is hard to understand.”

The language the Kenya natives speak is Swahili, according to Kosgei. There are different tribes that speak Swahili, but the mainland language is English.

“Swahili is mostly understood by the natives of the land,” explains Kosgei. “In school, we had to speak English. The teachers wouldn’t let us speak any other language, because when studying, everything is written in English. There is only one class that is about the Swahili language, and that’s the only class you’re allowed to speak that language.”

Since Kosgei has spent a lot of his time in the United States, he has more knowledge and understands more of the English language.

“I can speak English, but I may talk fast,” says Kosgei. “It’s still a little hard for me to understand the slang that is used. You know…whenever you’re not used to doing something? It’s hard. I can understand the English now. Whenever someone says something to me, I understand it. But, it takes a little while for me to answer back, because I’m still learning.” 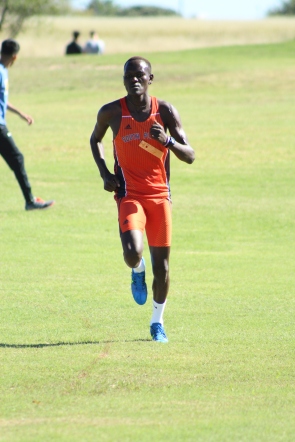 The language isn’t the only thing that is different from what Kosgei is used to. According to the SPC sophomore, the big difference he notices is people drive to get to their destination.

“The first thing I can tell is back home the big difference is we walk all the time,” explains Kosgei. “That’s what makes us so fast. People from the United States use their car all the time, even if they could walk somewhere. If it’s like two miles, they drive. But back home, we walk. The reason is because the cars are expensive in Kenya, and people can’t afford to buy the cars, which is why we walk almost everywhere.”

During Kosgei’s time at SPC, he has competed for the track and cross country teams. He competes in the 5000-meter run, the 3000-meter run, and the 1500-meter run for track events.

“For me, it’s a big accomplishment whenever I place at cross country or track meets, because being fast isn’t easy,” says Kosgei. “It takes a lot of commitment, and it’s really hard. That’s why whenever I win any competition, I get very excited. I can see running being a career for me. I actually do consider running my career, because I prosper in it most of the time.”

According to Kosgei, he plans to graduate from SPC next fall. He doesn’t have a specific school choice yet, but he has been receiving several offers to run for different universitites such as Alabama, Texas Tech, Oklahoma State, and Eastern Kentucky.

“Due to challenges in my family, I didn’t want to go to school again,” explains Kosgei. “After I graduated high school, I just wanted to focus on running professionally. To me, it seemed like running professionally would be the easiest way to help out my family. I didn’t know I was going to come to the United States, though. It’s a great experience, because I didn’t expect it.”

Kosgei says he’s going to miss the people who he as met and spent time with whenever he graduates and leaves SPC.