Covering football at different levels can bring many experiences for a sports journalist. But covering college football is by far the most exciting.

I had the opportunity to cover the Texas Tech Red Raiders for the Homecoming game against Iowa State on Oct. 21 at Jones AT&T Stadium in Lubbock.

Having worked for the local paper, the Hockley County News-Press, I learned the ins and outs of being a sports journalist and having to go out and cover high school games in multiple sports.

I was impressed with the professionalism everyone showed along with displaying their initiative to properly cover the game.

Accessing the appropriate areas, such as the designated entrances, press areas and field areas, was easy enough. Although I was unaware of the proper areas I was to follow, the Texas Tech staff kindly directed and showed me some of the ropes to follow and had no problem answering any questions I had.

Being able to maneuver through a large Tech campus can be difficult with such a big crowd gathering for Homecoming, but the Tech shuttle services made it easy for me to get to the stadium and back to the media parking areas.

This was one of the benefits that I enjoyed while experiencing my first college football game as a member of the media.

Getting to the right entrance was without a hassle, as the media doors are clearly marked and the security check was of no problem as well.

I have never had to go through bag checking and standard searches before, but the stadium staff guided me on the proper procedures to make it as easy as possible. 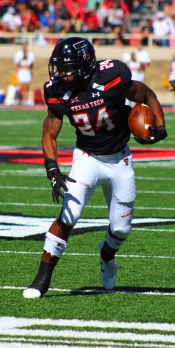 Making my way to the press box was exciting for me because it gave me a chance to meet fellow journalists and photographers, as well as ask a few questions about what they do and if they had any insight for journalists beginning to enter the field.

Being able to learn and see how the environment is in the press box and on the field was one of the important things I wanted to gain from an opportunity such as this. Enjoying the process was important as well.

I have spent some time in high school press boxes, and it was completely mind blowing how different both environments are from each other.

Within this enormous press box that at least sat 40 people, each seat was already assigned, and stats and other helpful materials were already placed at every seat. Instead of having to ask for rosters for both teams at a high school game, I was impressed with having all the proper materials at my designated spot and having stats and bios for all the players on both teams.

After halftime, I made my way to the field level to take pictures and enjoy the atmosphere on the field. Since it was Homecoming, I could feel the energy going through the stadium with fans from both sides being as loud as they could be.

Compared to a high school game with a few hundred people, Jones Stadium held thousands of energized fans, which made my experience better.

Getting to talk to some of the local Lubbock news station people, along with other photographers, was among the highlights of my experience.

Photography is not my strongest point, but being able to learn from others who have been in the field longer was enlightening and enjoyable.

Overall, covering high school-level football compared to college football amazed me. As I enter the sports journalism field after college, I look forward to working my way up to the college level and being able to cover football and other sports for a living.