Working toward a career in nursing is an endeavor that requires a lot of hard work, perseverance, and a willingness to attempt any daunting task.

These fundamentals are apparent in the journey of Mia Acebedo, instructor in vocational nursing at the Allied Health Building on the Levelland campus of South Plains College. Acebedo has encountered many of the difficulties that a typical nursing student faces while also having experienced the hardships of moving to a new country and adapting to the countless changes.

Acebedo described how her childhood consisted of playing with other kids during the weekends while working hard during the rest of the week to get a good education.

“I went to a Catholic school for most of my elementary and high school education,” said Acebedo. “Then, in college, I studied nursing.”

Becoming a nurse was something that Acebedo always dreamed of doing. Since her mother was a physician and a single parent, Acebedo spent a majority of her time at the hospital where her mother worked.

She described how she would go to the hospital after school and do a variety of things while her mother was on duty, such as doing her school work and sleeping. Constantly being at the hospital was the prime reason that Acebedo mentioned that caused her to want to pursue nursing.

“I kind of grew up in the hospital,” recalls Acebedo. “It was my world, so I didn’t see myself doing anything else that wasn’t hospital related.”

Acebedo graduated from high school in 1987 and later attended the College of Nursing at Remedios Trinidad Romualdez Medical Foundation in Tacloban City in the same year. In 1991, she graduated with her bachelor’s degree in nursing, which was a feat that included many hardships. 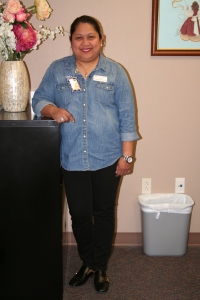 Mia Acebedo immigrate to the United States from the Phillipines to pursue her career in nursing. ANNIE GOLDEN/PLAINSMAN PRESS

Acebedo says her journey in becoming a nurse was very difficult. Her classes were demanding, and her opportunities to utilize high-quality nursing equipment and training were limited in the Philippines.

College is something that Acebedo says is very important for people in the Philippines. Most students, especially medical students, spend a majority of their time at school, where they would start early in the morning and end late in the afternoon.

“We strictly go to school,” said Acebedo. “We are not expected to work part time. I didn’t have to work, so I was really concentrating on my school work.”

This difference in a learning environment is something Acebedo noticed once she moved to America. Having gained most of her hands-on experience at a government hospital helped her realize the efficiency of better tools and supplies.

“The hospitals here are very equipped and modern,” said Acebedo, referring to her work experience in America. “Back home, it was a different experience; it was a challenge.”

Obtaining the opportunity to utilize everything that American hospitals have to offer was also difficult.

For nurses immigrating to the United States, getting a job can be very difficult, time consuming, and a little heartbreaking. Acebedo described how she had to leave her three kids back home for the first couple of years while she and a group of nurses were recruited by nursing agencies.

Acebedo came to America in 2005 when she was recruited by University Medical Center in Lubbock, which was a long process. Taking nursing exams, English tests, and doing video interviews were just a few of the things Acebedo listed that were necessary to obtain a job in America.

Acebedo continued to work for UMC, before getting a job at Covenant Hospital in Lubbock for a few years. About three years ago, she got an opportunity to work at SPC as a part-time clinical instructor for the ADN program. It was not until last summer that Acebedo got a job as a full-time instructor at SPC.

Acebedo’s journey throughout her education in the Philippines and experience in the United States displays the struggles and the amount of work some immigrants must endure to succeed. For Acebedo, moving to America offered her a worthwhile experience that she worked hard to obtain.

“It has changed my life so much,” Acebedo said of her move to America. “I am thankful for the opportunity.”