The Student Government Association at South Plains College recently has decided recycling bins needed to be placed around campus to improve recycling on campus.

The idea came to Jeremiah Patterson, SGA delegate, after his friends would give him all of their recyclable trash to take to the bins in the Science Building. He would collect plastic bottles and cans from his friends until he had enough to take.

Patterson, a commercial music major, said that he came up with the idea to place more recycling bins around campus to make it more accessible for students and talked about his idea with other SGA members, who all agreed it was a good idea.

“I have been here at SPC for four years,” explained Patterson, a Killeen native. “For a while, we had recycling bins in the dorms. But people would mistake them for trash cans and stuff, so it wasn’t really successful. My friends still continued to collect their recyclable material, and I would take it to the Science Building. But I’m getting ready to graduate, so I thought why not make it easier for future students to recycle before I leave?” 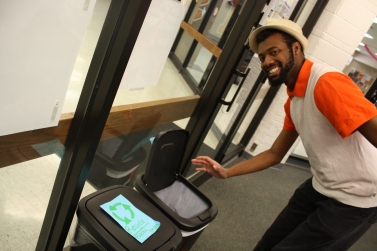 The SGA and other organizations will take what is in the bins to the Recycling Center in Levelland and Lubbock.

“The Science Building has aluminum can recycling bins,” explained Patterson. “Unfortunately, the Levelland Recycle Center has stopped taking plastic bottles. But the Student Life Center has both cans and plastic bins, and we take the plastic to Lubbock to be recycled.”

The SGA is looking to make the Levelland campus greener and have started the process by placing bins around campus. Patterson noticed how successful the Science Building’s recycling program was, so the SGA decided to expand the program.

“The Science Building has had a successful recycling program, so the Student Government’s plans for recycling is to put a few more bins in a few more buildings,” said Patterson. “Student Life and a few other organizations will collect the material and take it to the Recycling Center for it to be recycled.”

“I think people should get involved in recycling partially because why not?” Patterson said. “We use the materials once, and we can reuse them. So why not start now? If we recycle, we won’t have to dig up new things to use, because eventually you will get to the bottom of the barrel.”