After 60 years of dedicating their lives to South Plains College, Earl and June Gerstenberger recently were honored with the dedication of Gerstenberger Hall.

The South Plains College Board of Regents and administration hosted the dedication ceremony on Sept. 7. More than 175 members of the Levelland community, along with friends and family of the Gerstenbergers, were in attendance. The dedication was followed by a ribbon cutting and a reception for the honorees.

Earl Gerstenberger was one of the first faculty members to be hired at SPC. He was a former Blinn College agriculture and science instructor, as well as a football coach, before moving to Levelland. He taught agriculture at SPC from 1958 to 1969, then served as Dean of Men from 1967 to 1973. In 1973, he was became Dean of Students, a position he held until 1982, when he became vice president of academic affairs before retiring in 1993.

June Gerstenberger joined the SPC staff in 1967 as secretary to the Registrar. She spent 26 years assisting SPC students in the registrar’s office, and then later worked in Financial Aid, Special Services and the Business Office.

The Board of Regents passed a resolution on May 10, 2018 to change the name of the college’s newest student residence facility from Southwest Hall to Gerstenberger Hall.

“Everyone of our residence halls is named after a significant contributor to South Plains College,” explained Dr. Robin Satterwhite, president of SPC. “We had one residence hall left, Southwest Hall, that didn’t have a name.”

Dr. Satterwhite said that he and the regents started to have a decision-making conversation on naming Southwest after Earl and June Gerstenberger, because they were significant members of the original SPC family.

“We started asking around, and every single community member, faculty member and staff afterwards said that this is the best decision we could possibly make,” Dr. Satterwhite said. 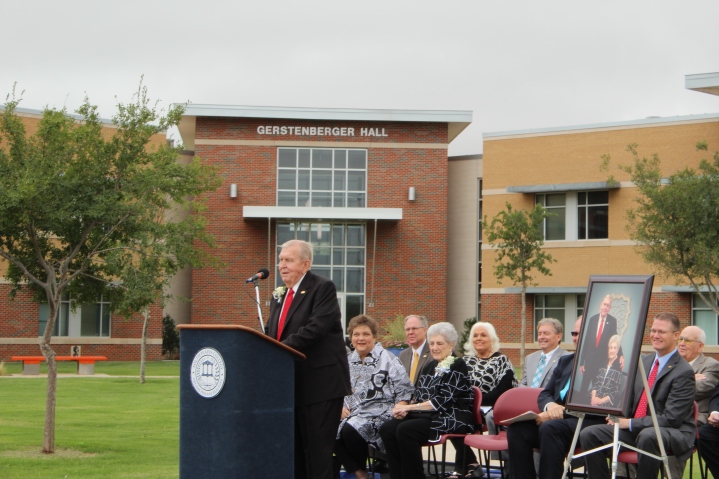 Earl Gerstenberger responded to the dedication by thanking the college and regents, and shared stories of  his time at SPC.

“Thank you all for coming,” said Gerstenberger. “It’s a wonderful experience. It’s very difficult to explain. But to June and I, this is a very emotional time, and we have so much love and understanding between all of these people and all of you. We are just so grateful.”

Gerstenberger Hall is located at South College Avenue and J.V. Morton Drive, across from Tubb Hall. Earl Gerstenberger explained that the great thing about the dedication to him is that he and Nathan Tubb, the college’s first registar who later served as  the academic dean from 1965 to 1981, have not only been associated in the past 60 years, but are going to be neighbors, in a way, forever.

“We feel overwhelmed,” said June Gerstenberger. “There have been so many people that have done so much, and we are grateful.”

Earl Gerstenberger explained that the naming of the residence hall is something that is “a legacy from the past and now and into the future. It’s long lasting, and that’s tremendous.”