During the course of five semesters, Sophia Barnett has demonstrated what it truly means for students to step out of their comfort zone and be involved with activities attending at South Plains College.

Barnett had been homeschooled for most of her life while living in Midland, Texas. Six years before she came to SPC, Barnett began to move with her family and travel throughout the United States, due to her father’s profession as a nurse.

Barnett says she enjoyed being homeschooled because she “didn’t know any different,” and it would be easier than having to transfer from school to school. However, if she wanted to try a public school, she could have, although she had just never felt the need to do so.

Barnett shares that her family owns an RV that they would pack up and take whenever they were ready to move to the next state. Her family moved across the country to roughly 10 different states, often moving every three months.

For fun, since they were already traveling, Barnett says they would take short trips and have visited 28 other states.

“I like that there were so many opportunities to do different things that I could not do in one place, like surfing and skiing,” Barnett said. “Although, I did not like saying goodbye so many times, plus I have missed my family farm that that we would live on occasionally.”

Barnett had originally heard about SPC through her older brother who attends Texas Tech University and told her about how great the campus is.

“I had decided to check it out once he had brought it up,” recalls Barnett,” and when I got here I instantly fell in love with this college.”

Barnett came to SPC in the fall semester of 2016 to major in computer science. She used to spend a lot of time looking for different programs on her computer, and eventually programing became an important aspect of her life.

Barnett hopes to graduate from SPC and transfer to West Texas A&M University. She plans on continuing her studies in computer science and go into cyber security.

Cyber security is protection for information systems, and Barnett said she hopes that she can help prevent future attacks. She plans on using her computer science skills to help track down criminals who commit computer-related crimes.

“I just want a job that I am happy to go to every day,” Barnett says. “I didn’t even know that computer science made so much money. I’m doing it because it’s something I love to do.”

Barnett claims that she is also very open to other job opportunities, but says she hopes to find a profession in law enforcement or a security agency. 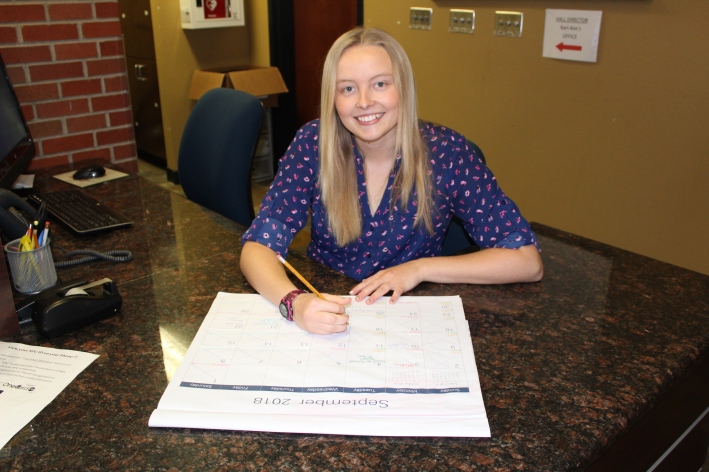 During her time at SPC, Barnett has been involved with many different organizations, such as the Resident Hall Association. She also serves as an RA at Tubb Hall. She also gives tours as a Campus Ambassador, and during spring 2018 semester, she worked with Public Relations.

Barnett also holds a position as a scholar assistant for Charlotte Young in the computer science lab in the Math Building.

“For one, being involved has helped me become more social, because I was introverted when I started here,” Barnett says. “By meeting friendly people, it has helped me be comfortable and step out of my shell.”

Barnett also participated in the National Community College Aerospace Scholars (NCAS) program with NASA during the summer of 2017. She completed a five-week online course and then got accepted to go to the Johnson Space Center for four days in September of that year. Barnett worked with a team of other students to build and program a rover to compete against other teams.

“It got pretty rough at times, Barnett recalls, “because we had 10 members to a team and it was hard to all get along and agree on things because there were so many of us.”

Along with having the opportunity to participate in activities, Barnett took a private tour of the space center. She also had the chance to listen to professionals who work and intern for NASA.

Due to Barnett’s campus involvement, academic standing, and positive character, she was selected as the President’s Student of the Year at the end of the spring semester of 2018.

Being involved with many different organizations has its benefits to help Barnett be more successful. She has received scholarships for being a Campus Ambassador. As an RA, she receives free housing and a meal plan for the semester.

Barnett explains that the biggest thing that helped her become involved at SPC is to try to attend events and form connections that way.

“My best advice would be to just talk to people,” Barnett says. “Not just people who have the same major as you, or the people you live with, but everyone. By meeting people with different backgrounds, it can be beneficial to having an open mind.”

Barnett has been encouraging her peers to attend campus events and continues to have a positive influence on those around her. She ensures individuals not to be afraid of what others will think, because at the end of the day, your true friends will stick around no matter what.