Goat yoga is a new trend that will have you “kiding” around during class.

Goat yoga is like a typical yoga class session, only with miniature or baby (kid) goats. This is called caprine vinyasa, which consists of various asanas (poses) primarily at the  beginner level. 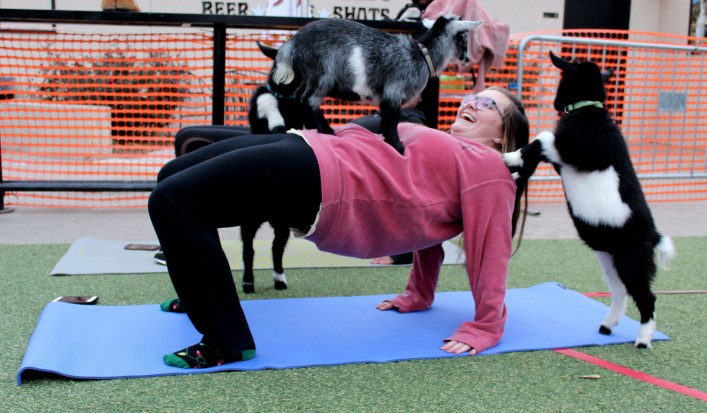 The outdoor patio at The Garden in Lubbock recently served as a venue for goat yoga sessions. Rachel Henson, owner of Goat Yoga Houston, brought her miniature goats and crew to Lubbock on Nov. 17. She provided five sessions to give people plenty of opportunity to come join the fun.

Henson said she has been instructing goat yoga classes for almost two and a half years, but it was the first time she has brought a class to Lubbock. The college tour also includes stops in College Station and Huntsville. Henson explained that it is hard to travel with her goats, but “it’s something I enjoy, bringing it to different people who haven’t done it before.”

Henson grew up in the country, hanging out in the pasture with her cow and dog. Later, she got on a rodeo lamb and goat committee and stayed for nine years, helping kids and animals. She said it was not that much of a stretch for her to decide to pick up goat yoga in Texas after she saw it being done in Oregon.

“We were the first ones in Texas,” she said.

The people who came to the classes loved it, and so did the goats. While yoga is supposed to be a focused practice to grow the body and mind, goat yoga is the complete opposite. The goats climb, jump, stomp, and cuddle, on the attendees. During the session, participants also are more than welcome to pet, hold, and cuddle the goats.

“This is your time spent with the goats,” Henson said. “It won’t hurt my feelings if you ignore the yoga in the class.”

Many other instructors feel the same way. Even if you try to focus on the yoga, at some point a goat will get you to laugh.

Although goat yoga is meant to be a relaxed form of yoga, it can also be challenging 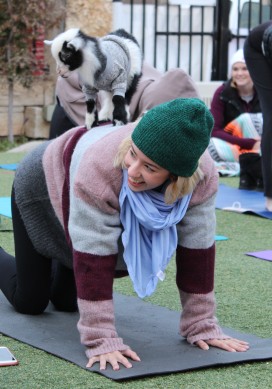 because while you are holding a pose, a goat might just climb on top of you. The goats with a tremendous amount of calming energy will also try to break your attention by trying to cuddle up next to you on the mat, trying to suckle your fingers, or simply trying to get a good scratch. Although the goats can make it slightly more challenging when they climb on you, their hooves can provide a little bit of a massage as they stand, jump, and balance on you.

Goat yoga is a great way to take a break from all the stress in life. Classes usually start around $35, but can be higher depending on where you are.

Goat yoga began in Corvallis, Oregon, as the idea of Lainey Morse. Morse had gotten two goats in 2014, naming them Ansel and Adams. Later, she was going through a divorce and was diagnosed with a disease.

“My life was a mess,” she said. “The goats were my happy distraction.”

Morse started seeing how therapeutic goats could be and that people would leave happy after spending time with her goats. In 2015, she opened up her place to the community, letting people come and spend time with the goats during “Goat Happy Hour.”

“I had donated a kids birthday party to charity,” Morse recalls. “At that event, one of the parents was a yoga instructor. She saw how beautiful it was in my field and asked if she could have a yoga class.”

Morse says that she told her she could, but that the goats will be all over the attendees.

“She thought that sounded cool,” Morse said, “so I had her over to do a photo/video shoot with the goats and her doing yoga poses in my field.”

Seeing how big of a hit the one class was, Morse decided to host more.

“When I started Goat Yoga, it was about the therapy that it can provide,” Morse said.

She also explained that she feels that she was put on Earth to make sure that goat therapy becomes just as used as equine therapy.

“Goats are better suited for therapy animals,” said Morse, “because they are not as big and intimidating.”

Morse also said that goats do not need a bond to a human to love them.

“They are social and loving animals and don’t need a bond with a human to just walk up to you and cuddle you,” Morse said.

She thinks that is a very important and appealing part of it, because some people do not get love from humans or animals. Morse said goats are funny animals and make you laugh. They are present in the moment, and can be very relaxing to watch.

“All of those characteristics make for the perfect marriage with yoga,” Morse said.

She also pointed out that dogs and puppies like to bite and play, and cats and kittens have sharp claws and usually like to spend time by themselves unless they have a bond with a human.

Morse says that her journey with Goat Yoga was difficult at first. People copied her idea, making it hard to compete with so many different businesses because their prices were lower.

“We were in a real business, paying employees, taxes, insurance, etcetera,” she said.

She also had a lot of medical debt after she had gotten sick. Having full size and grown goats, she said, “most competitors are also dairy farms that have babies constantly. It’s hard to compete with that, since most people want babies in the class.” 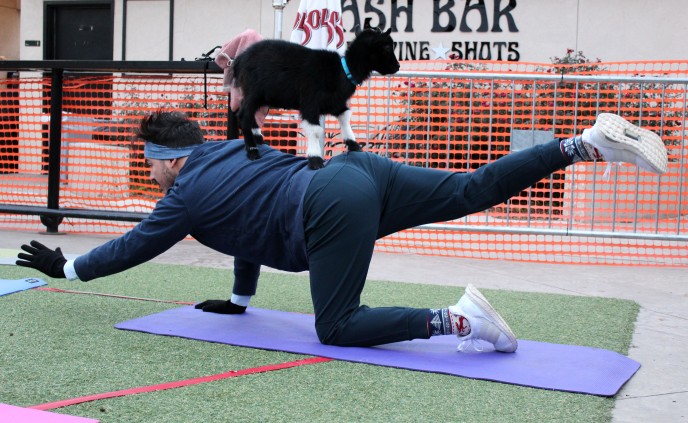 She adds that most of her goats are in their forever homes and are never sold for meet or over-bred for dairy. Morse left her marketing job in 2017 and later changed her company’s name to Original Goat Yoga in order to still be able to set her company apart from others.

“It was really fulfilling to have founded something that went viral,” Morse said.

But she was not prepared for how cut throat it could be with competitors. On top of that, Morse has animal activists attacking her frequently who judge her because they see how other businesses treat their goats.

“If they could only see what a great life these goats have (out in her field),” she said. “They’ve went so far as to make fake Facebook profiles to give me one–star reviews or comment on articles about what a horrible business woman I was.”

The best part of her journey is watching how happy it makes the participants, Morse said.

“When people come to the classes, they are smiling so hard and they leave so happy,” said Morse.

She said it is really fulfilling to know that goat yoga has spread all over the world, from South Africa, Australia, and all over the USA.

Starting from a small interest and growing to be the newest yoga trend, you can find these fun classes almost everywhere.