“METALACHI” is the world’s first and only Heavy Metal Mariachi Band.

“METALACHI” plays their music with traditional Mariachi instruments, but to the tune of ‘80’s hair metal bands, with covers from bands such as, Pantera, Metallica and Black Sabbath.

The band members of “METALACHI” originally featured five brothers. Before “METALACHI” was conceived, the brothers were traditional Mariachi players. Through the years, three of the five original band members left the band to pursue other lifestyles. 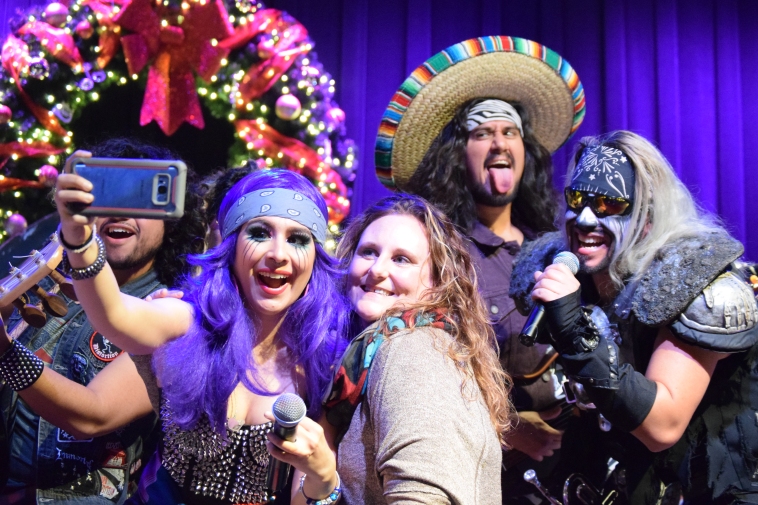 The brothers had thought it would be fun to learn “Iron Man” by Black Sabbath with their instruments. One day, while performing at a party, they started playing “Iron Man” and the crowd reacted wildly. Inspired by the crowd’s energy, the original idea for “METALACHI” was soon born.

“METALACHI” has used different instruments through the years. They try to keep things as close as they can to traditional Mariachi while still being able to play metal that sounds good. On previous albums, one might have heard a regular violin. But now “Queen” Kyla Vera sports an electric violin that is hooked up to many sound pedals that produce a plethora of different sounds that a regular violin could not make.

“Not all songs lend themselves easily to our instrumentation,” El Cucuy said.

“METALACHI” has toured the country, with their largest fanbase in Texas, especially in the Corpus Christi area.

El Cucuy explained that Lubbock is the first place they ever performed in Texas, so it holds a very special place in the hearts of the band.

“METALACHI” performed in Lubbock on Dec. 2 at the Cactus Theatre. I had the honor of attending the show and interviewing El Cucuy and Vega De La Rockha during intermission. It was a glorious performance. The energy of the band was electric, and the fun I had will keep me talking about “METALACHI” for years to come.

METALACHI was raunchy, heavy, fun, and hilarious all in one package. The show was explicit and beautiful, with eye-catching stage props and bras hanging from microphone stands. “METALACHI” also blends quite a bit of stand-up comedy into their show between songs.

The stage was Christmas-themed, and even their set list included “Feliz Navidad.” The set list also included anything from traditional mariachi to hair metal, including “Bohemian Rhapsody” by Queen. I couldn’t get enough and was excited to see an encore, which “METALACHI” so graciously performed. By the end of the night, almost the entire crowd was standing in front of the stage waving their hands.

“METALACHI” is currently touring the West Coast. To date, they have released three albums, “Uno” “Dos” and “Tres.” All of their music can be found on Itunes and Spotify. They also recently released a music video of a “Bohemian Rhapsody” cover on Youtube.