‘You’ provides window into mind of stalker

A clever bookstore manager relies on his savvy internet know-how to make the woman of his dreams fall in love with him.

To start off the new year, Netflix adds a glossy new drama and thoroughly addictive show, ‘You’ on the streaming service. Adopted from the psychological thriller novel ‘You’ by Caroline Kepnes, it is a classic story of boy meets girl, except the boy is actually a deranged stalker.

This is a story we’ve all heard before. But this time fans of the show get to see it from the point of view of the stalker, Joe Goldberg, who is played by former ‘Gossip Girl’ star, Penn Badgley.

While the series’ promotional images may lead viewers to believe it will just be another teen rom-com, ‘You’ takes a slightly more creepy turn.

The interesting thing about this show is its play on social media and on the psyche of people. Even with the stalker mentality of the show, there are many aspects that keep fans glued to the screen and constantly wondering what is going to happen next.

Joe, the bookstore manager, becomes besotted with aspiring writer, Guinevere Beck , played by Elizabeth Lail, after crossing paths with her. One daunting aspect of the show is seeing how easily and how much he can find out about the object of his desire simply through social media. He doesn’t stop there though, and soon he finds himself willing to do anything, including committing murder, to secure a future with Beck. 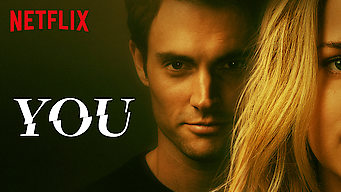 In the first episode, I thought Joe was just slightly weird for stalking Beck. However, as the episode unfolds, the viewer starts to see just how psychotic he really is.

‘You’ puts a unique spin on the stalker angle while also throwing light on the way someone conducts themselves on social media and just how exposed someone can be. It also pushes viewers in a morally ambiguous area of actually rooting for Joe and Beck to end up together, until you realize that Joe is actually crazy.

The more important message of the show is to trust no one.  Also, it is telling viewers to look up from their phones every once and awhile. Throughout the show, Beck is incredibly unaware and has no idea she is being stalked, even though Joe is standing very close to her all the time. Kind of like when Clark Kent puts on glasses and no one recognizes him as Superman, Joe puts on a baseball cap and, suddenly, Beck can’t see him in a restaurant, on campus, or even when he is standing outside her window.

Originally, I thought the show would be ordinarily far-fetched and a little boring. But with the way it is told, the show is executed perfectly, and viewers are never left bored at the end of an episode.

Joe makes it his mission to become Beck’s lover by stalking her and attempting to show her that they can live the perfect life together. Throughout the series, viewers also know what he is thinking through narration as if actually inside his head. It is almost as if he wants viewers to know how sick and twisted his mind is. This is a feature in the show that I really enjoyed. Viewers get to gauge a true understanding of the character and the real reasons behind why he was doing what he was doing.

Many people I know, me included, find the mind of a serial killer to be interesting. They want to know their motives, and this show provides that opportunity. Joe goes as far as posing as a potential business partner to kidnap Beck’s so-called boyfriend, Benji, played by Lou Taylor Pucci.

Joe keeps Benji in the basement under the bookstore he works at, and viewers see that Joe has a decision to make. Because of the show’s psychotic mentality, viewers are led to believe that Joe was not a killer and  that he may have even let Benji out from the basement. Joe eventually realizes that he may have messed up, but ultimately he decides to murder Benji. That was a major turning point in the show. This is where my whole view of the show changed.

As Joe continues to move closer to Beck, her best friend, Peach Salinger, played by Shay Mitchell, is next on his kill list. From the start, Peach is wary of Joe. As time goes on, Peach tries to convince Beck to leave him. Obviously, Joe does not like that, and he tries to not only kill Peach once, but twice. I was never a fan of Peach to begin with, but in this show, viewers can really feel the weight of each death when they occur. Maybe that is because the show feels very real, and it wasn’t an idea that was too dissimilar to what could potentially occur in everyday life.

With all of his competition and people who are skeptical of him out of the way, this helps Joe to have his chance to live happily ever after with Beck. However, that is not the case.

Their relationship takes a turn for the worse, and even though Joe was loving her unconditionally, Beck started to fall out of love with him. I’m glad they include this in the show and don’t just make it a happy-ever-after story. Beck has been through a lot and has some underlying issues. It results in her cheating on Joe with her therapist.

Near the last few episodes, the show gets to be a little predictable until Bekah looks into Joe’s ex girlfriend, Candace, who is played by Ambyr Childers. Throughout the show, viewers get the impression that she died. But where she has gone or what actually happened to her remains a mystery until the last episode. Viewers are led to believe that Joe may have killed Candace. That is one thing Joe always did with his victims, use their social media for a bit to make it seem like they are alive.

To me, Joe does not seem like a killer who is extremely smart or really knows exactly what he is doing. But he did, or viewers are led to believe that he did.

I thought the show was fantastic. It took its viewers on a journey with a serial killer, but also provides insight into his mind. The series took me on a rollercoaster of different emotions. At one point, I almost feel bad for Joe when things aren’t going his way. It was also very intriguing to see things from the monster’s point of view so you know he’s not so bad.