The South Plains College women’s basketball team fell short in the third round of the NJCAA Division I National Championship tournament despite strong play in the first two games.

The No. 10-ranked Lady Texans matched up against the No. 2-ranked Gulf Coast State College in the Elite-Eight round of the NJCAA National Tournament held on March 21 at the Rip Griffin Center on the campus of Lubbock Christian University.

“I’ve said all year that I thought we were two of the best teams in the country,” said Cayla Petree, head women’s basketball coach at SPC, at the post-game press conference. “They’re a team full of Division I players, and they have maybe the best coach in junior college basketball, so this game was nothing less than expected.”

Sophomore Keke Hunter drew a foul on the offensive end from Gulf Coast’s Dominique Banks, then knocked down both free throws to put SPC up by one (66-65) with 1:34 left on the clock. Gulf Coast answered with two free throws after a foul by freshman Sarah Shematsi, bringing Gulf Coast back up by one at 67-66 with 1:17 remaining.

Hunter led the scoring for SPC, recording a double-double with 17 points and 13 rebounds. Hunter was 7-for-16 from the floor and 3-for-5 from the free-throw line. Green had 14 points in her final game as a Lady Texan, hitting six of her 15 shots from the field, including 2-for-5 from three-point range. Green also recorded four rebounds, three assists and two steals.

“I could not be more proud of every player on our team’s effort,” said Petree. “There wasn’t a lot left out there. It was a one-possession game. One little ‘my bad’ over the course of 40 minutes determined a battle between two really good teams.”

Shematsi scored 11 points on 4-for-12 shooting from the field, including 3-for-9 from the three-point line. Freshman Ruth Koang contributed seven points, knocking down two of her six shots from the field and going 3-for-4 at the free throw line.

Germond and Oceane Robin each had six points. Germond was 2-for-8 from the field, 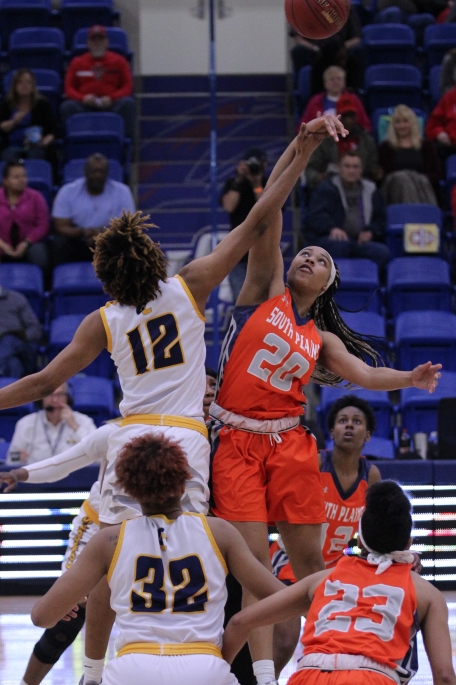 hitting two three-pointers, while Robin went 3-for-7 from the field and had two rebounds.

SPC topped Seward County Community College 87-61 in the second round of the NJCAA National Tournament on March 20 at the Rip Griffin Center in Lubbock.

Shematsi led the scoring for the Lady Texans with 28 points, knocking down 11 of her 20 attempts from the floor. She also was 4-for-7 from behind the three-point arch, and pulled down three rebounds. Hunter recorded a double-double with 20 points and 16 rebounds in her 29 minutes on the hardwood.

SPC shot 46.7 percent from the floor and 40.9 percent from behind the three-point arch. The Lady Texans also out rebounded the Lady Saints 51-25.

SPC routed Harford Community College 77-52 in the first round of the NJCAA National Tournament on March 18 at the Rip Griffin Center in Lubbock.

Hunter and Germond led the scoring for the Lady Texans. Hunter recorded a double-double with 19 points and 12 rebounds, shooting 6-for-11 from the floor. Germond shot 7-for-13 from the field and was 4-for-8 from the three-point line, finishing with 19 points as well.

Govan had seven points and five rebounds on 2-for-6 shooting from the field. She also was 3-of-5 at the free-throw line.

The Lady Texans competed in the NJCAA Region V tournament on March 6 – March 9 on the campus of Abilene Christian University.

SPC defeated Ranger College 50-44 in the first game of the Region V tournament on March 6. Hunter and Shematsi paced the Lady Texans with 21 points and 14 points, respectively.

The Lady Texans later fell to Odessa College in their second game of the tournament. Green led the scoring with 19 points, while Hunter was close behind with 18 points.