Every four years, the country begins the nominating process of candidates for United States presidential elections.

The history of presidential primaries and the processes of primaries were the main topics discussed at the Constitution Day event at South Plains College.

The Social Sciences Department hosted the annual panel in honor of Constitution Day, which is a federal observance that recognizes the adoption of the United States Constitution and those who have become U.S. citizens.

Drew Landry, assistant professor of government at SPC, served as the moderator for the discussion held on Sept. 21 in the Sundown Room in the Student Center Building on the Levelland campus.

Landry said that primaries are not actually mentioned anywhere in the Constitution.

Holland began the panel by explaining that presidential primaries are unlike any other types of primaries.

“Whenever you vote in a normal primary, whether it’s for Congress or the sheriff, your vote is directly going to choosing who’s going to be the nominee of your party,” Holland explained. “But one of the interesting things with the presidential primaries is you’re actually voting for delegates. And it’s the delegates that get elected to your national party convention that will actually choose who’s going to be your presidential nominee for either the Democratic Party or Republican Party, or any of the various third parties.”

Holland also mentioned that with the upcoming election there will be a lot of coverage of the nomination process.

“There are 22 candidates or so currently running for the Democratic nomination,” explained Holland. “That means that there’s going to be a lot of splitting of delegates from each state. And so the possibility that we might end up at a brokered convention, which we’ll talk about a little bit later, is pretty likely at the moment if we continue to have so many candidates. You are going to have quite a bit about divisions that are going on. In the most recent polls, Biden was only pulling 20 percent nationally, Warren 18 percent, and Sanders 16 percent. They’re nowhere near the majority that they’re ultimately going to need, or to have enough delegates, to win the national convention.”

Bearden-White followed by giving the history of primaries. 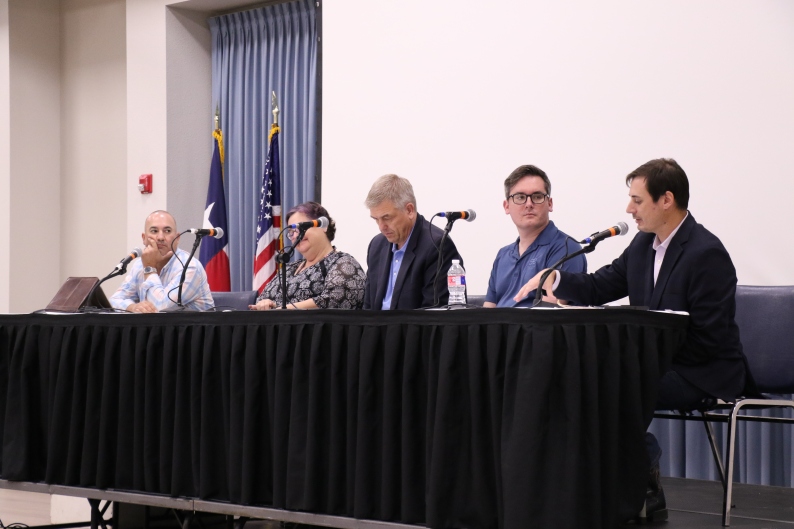 “The Constitution had no provision for political parties to begin with,” Bearden-White explained. “In fact, many of the founding fathers thought that a political party would be the downfall of the new Republic. Even James Madison, who’s considered the father of the Constitution and who wrote the first 10 amendments to the Constitution, and Alexander Hamilton both wrote papers that said what we don’t want is partisanship. Madison believed that there wouldn’t be any one party. He believed that people would have factions and thought that different factions would come together, and that they would form a party briefly in order to get things passed.”

She also explained that later both Hamilton and Madison ended up becoming heads of the first political parties.

“The first elections that happened were not by the people at all,” said Bearden-White. “They went through the electoral college. And they would cast one for president and one for vice president. So the first presidential election where they had two political parties running, John Adams, who had been vice president, became president and then ended up with a person on the opposite ticket, Thomas Jefferson, as his vice president.”

She explained that later the 12th Amendment put into law that presidents and vice presidents had to be in the same parties. Bearden-White also discussed how, historically, primaries were conducted and changed, as well as Abraham Lincoln’s election.

The panel discussed that historically you had to have name recognition in order to run for president.

Tepper talked about how a lot of the primary process is dictated by state law and election code.

“Which is a bit controversial within the parties,” he added. “We don’t think the state should be telling us how to run. We are independent parties, we’re independent citizens and we don’t believe that they should have any influence over the structure of our political parties.”

Tepper said that state codes don’t mention Republicans or Democrats, but just mentions that a party has to conduct themselves in a certain way. He explained that both parties are obligated to a chairman of the party, a state chairman and the vice chairman. If the chairman is a man, then the vice chairman has to be a woman, or vice versa.

The panel then discussed the upcoming primary battle in 2020.

“There are some states that are wanting to cancel their third GOP primaries. What do you make of that? Do you think that’s a good thing?” Landry asked Tepper.

Tepper said that every party is going to want to have a vote in the primary process.

“There was a big Free the Delegates movement (in the 2016 primaries),” explained Tepper. “As a matter of fact, my vice chairman in Lubbock County was part of the Free the Delegates group. And then there was a lot of relationships broken over that process. The Texas delegation was at almost fisticuffs in hotel lobbies between Ted Cruz and Donald Trump at the time.”

Tepper explained that with the upcoming primary, there could be a lot of tension and division about who will be the candidate like has been seen in the past. Ultimately, it is going to come down to which candidate is better at interacting with the delegates who will decide the nominees, according to Tepper.

Gibson discussed that there are more disagreements in the Democratic Party about policies and procedures rather than the candidates’ stance. They are looking at whether candidates are using rules properly.

The panel also discussed how Texas’s demographics will play a major role in the upcoming election.

“Texas has been a majority minority state for quite some time now, 10 or 12 years,” Tepper said. “The white voters are outnumbered. They have been by the Hispanics, Asians, and Blacks, and some of those groups tend to vote Democratic. We’re starting to see a shift there.”

Tepper also said that Texas is becoming more of a metropolitan state, so the urban areas are growing and tend to vote more Democratic as well.

“The demographics are definitely shifting to make a more competitive state,” Tepper said. “It’s also interesting that Texas has been able to export a lot of resources over the years, money and volunteers (for campaigns.)”

He also explained that Texas has become more and more a two-party state, which makes it a major variable in the upcoming election.

The panelists also answered questions about PACS, voting percentages of the country and ranked voting.