Sociology instructor connects material with the lives of students

When Sherley Bedore decided she wanted to be a doctor, she set the goal of achieving that dream before the age of 32.

While her path changed from her original goal, she still accomplished becoming a doctor before the age of 32.

Dr. Bedore grew up in El Paso and moved to Lubbock as a teenager because her father was in the military. She attended Estacado High School in Lubbock and graduated two years early.

Dr. Bedore received a multidisciplinary studies bachelor’s degree in mathematics and science in 2011.

“So I had set this goal when I was a teenager to be a (medical) doctor by 32,”Dr. Bedore explained. “When I was an undergrad, I was a first-generation college student. I didn’t know what that entailed, being a college student. I didn’t know how to study for college. I found it to be like just a whole new world of trying to get used to people and having the guts to even talk to my professor.”

Dr. Bedore explained that she almost failed school because of not knowing how to communicate with her professors.

“Actually, I almost dropped out because of that,” Dr. Bedore added. “Because I didn’t feel comfortable being where I was, and I didn’t feel a connection to my college.”

She said that she met a professor who had told her she should go to graduate school. She explained that at the time she wasn’t even sure she was going to finish her bachelor’s degree.

“And that was the first time that I thought that, in some way, I could pursue something beyond a bachelor’s,” Dr. Bedore said. “Like I really thought, ‘OK, get your bachelor’s and then just get a job and live your life. And it was the first time where I think someone else saw the potential in me to move and really develop past my own barriers.”

While pursuing her bachelor’s degree, she met another professor who taught human sciences who helped guide her. She said that her professor had taught her how to research and piqued her interest in an area of study she would later explore in more depth.

“I knew that I liked people,” said Dr. Bedore, “and I knew that I liked language, identity and self. But I didn’t know how I wanted to tie them together. She saw how those all could go together, for me, as maybe a future scientist.”

Dr. Bedore said that even though she didn’t think she would be admitted into graduate school at Texas Tech, she applied anyway.

“I kind of live my life to where, I open as many doors as I can and the ones that stay open, those are the ones I walk through,” Dr. Bedore explained. “At least that’s my perspective on things, because sometimes we can be scared to even open doors and see what’s on the other side, and even just to walk through them. I decided I’ll apply and see what happens. If I don’t get in, I’ll get a job. That’ll be another door. And I got in, and I didn’t get a job, which is funny and I couldn’t believe that I, one was the first person in my family to get a bachelor’s, but also being the first person to pursue a graduate degree.” 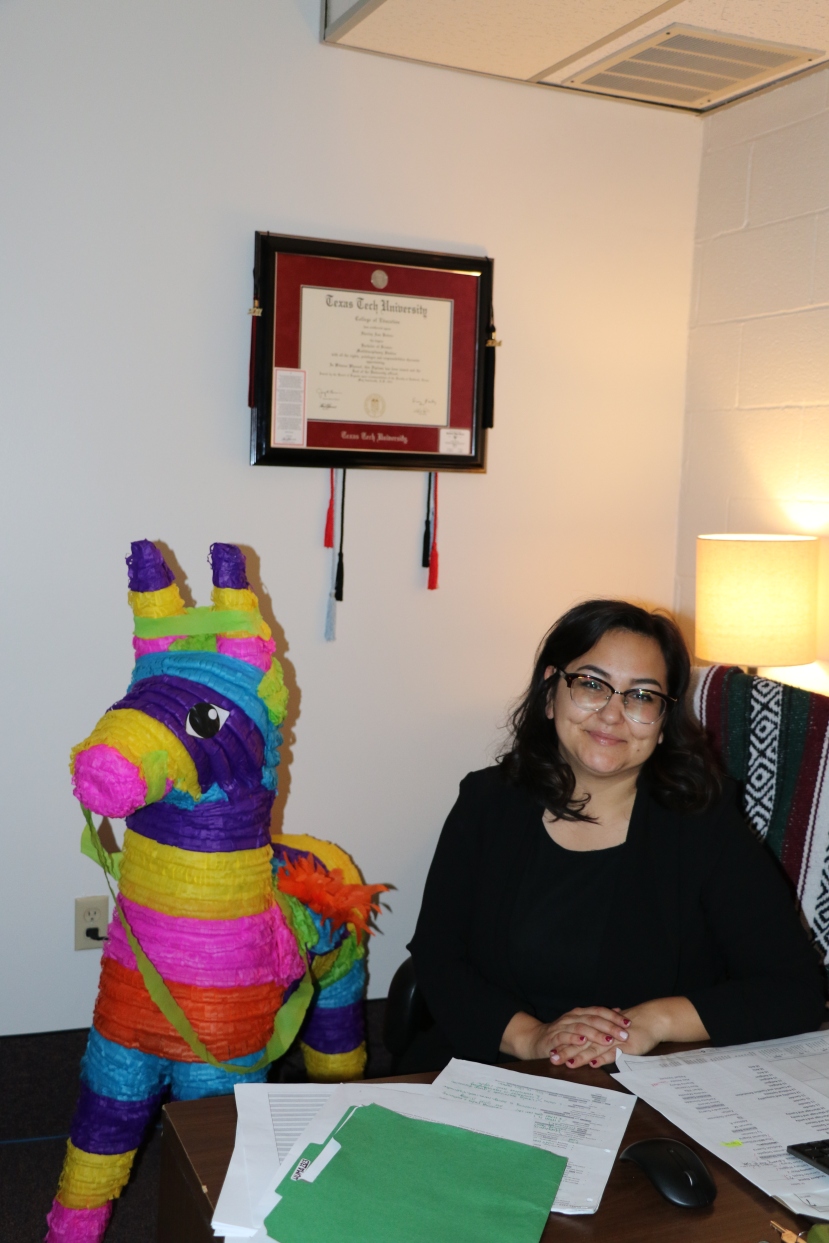 “I was going to join the Marines and become an officer,” Dr. Bedore said. “And I applied for scholarships and for fellowships and I didn’t think I would get them, because I rarely ever got these kinds of opportunities. And I got a fellowship to pay for all of my PhD.”

Dr. Bedore began teaching at SPC in the Behavioral Sciences Department in January of 2019. She said she wanted to apply at SPC because of the reputation for teaching that she had at Tech.

“Apparently, at Tech I got quite a reputation for being a really involved and really good lecturer,” Dr. Bedore explained. “I credit that to the professors that I had, including the one professor that I had that one summer (who had encouraged her to apply to  graduate school) who I don’t think did anything particularly special in the way that he lectured, but the way that he connected the material to whoever was in the class.”

She said that she had a lot of good examples to go by for her teaching style.

She explained her teaching style is catered to her students and nurturing their learning experience. She said that she doesn’t want her students to be stressed about learning the material and is as transparent as possible with what she expects from them.

“But I also play on the strengths of the students,” Dr. Bedore added, “like whether or not they are going to be good test takers or good writers, or if you’re going to be able to accomplish all of the things that I am expecting. But I also make sure that the students know that you can always ask questions in class.”

She said that is why she does the style of teaching that she does, always talking about what students are doing in their lives.

“So if I can relate to you in some aspects, I think it’s going to be more understandable, and more relatable when you’re reading about this material and trying to learn it,” Dr. Bedore said. “It’s easier for me to give you ‘you’ as an example. So that’s why I came here, because the student-centered atmosphere here is unlike any other place I’ve ever been.”

She said that she has wonderful support from other faculty members, and even from the department, for being able to do and create what she wants in getting her students to understand the material.

“The environment here is just more supportive for me as a creative,” Dr. Bedore said, “because this is somewhat of an art, to be able to create this learning interaction in the class.”

Dr. Bedore has also done her own research and participated in other sociological research, along with teaching. She said that after getting her degrees, she was very involved in the scientific community, attending conferences and consulting on the research by others.

One of her personal research projects was “An Exploratory Study of Self-Concept: The Self as a Developmental Process Across Cultures.”

“When I was an undergrad, I had done some research with a professor, and I knew that I was interested in identity and self,” Dr. Bedore said. “More specifically, I found out that I was more interested in self concept. I was always interested in the kind of environment that creates these ideas of who we think we are and what makes me so unique from everyone else if we have the same experiences.”

She said that her research was trying to understand if despite one’s environment and despite one’s culture, if the self is something that everyone creates in their mind. Bedore wanted to study who we are based on all these values, thoughts, and perceptions that we all have. As well as to see if there are common themes that go into the creation of who you are in your mind.

She also did research on kids in middle school who were at high risk for not graduating from high school, to see if inverations of mindful meditation and yoga could improve their behavior.

Dr. Bedore said she wanted to continue to look at ideas of self and what happens when those ideas go bad. She studied 20 students from a middle school in Lubbock and gave them a questionnaire before and after to track the change.

“They did six sessions over the course of a month and a half,” explained Dr. Bedore. “It was once a week. So already you think we’re not going to change anything in these kids because they’re (the sessions) too far apart from each other. On top of that, they’re only 35 minutes long. What are you going to change in someone in 35 minutes?”

She said despite everything that she was open to the challenge. She analyzed data on the questionnaires she gave the students to see if their symptoms of depression, anxiety, satisfaction with life and other factors had changed.

“If you want to see if you truly change that person, then I need to be able to capture what you are and how you are beforehand, give you this intervention and then capture it again.,” Dr. Bedore explained. “And if those two moments in time of self are the same, then whatever I did to you didn’t do anything. If they are different, then whatever I did in your environment changed you in some way.”

She said that after she looked at those two moments in time, she saw a significant change for the better.

“When you have developed this idea of self to be deviant, it takes a long time to get that,” Dr. Bedore said. “But what I was able to show was that it doesn’t take very long for someone to learn how to change, and how to change these ideas of who they are and to feel better about themselves.”

Dr. Bedore has also conducted several other studies, including: “Emotional Wellbeing in

Dr. Bedore has worked in many different fields, such as criminology, human development, cognitive science, PSTD, autism intelligence and risky behaviors in sex and adolescents. She has also published research in Spanish as well.