A troubled high school student has just been released from juvenile detention after five years. He hopes to make amends with his childhood friends, but his past keeps haunting him.

“Twisted” is a teen drama, mystery, and thriller television series. It came out in 2013 on the television network, Freeform. The show follows teenager, Danny Desai, played by Avan Jogia. When he finally gets to come home, he soon realizes that things are not the way they used to be in his hometown of Green Grove, New York.

Danny was convicted of murdering his aunt by strangling her with a jump rope when he was 11 years old. His best friends were in the backyard when the crime occurred, so they saw the aftermath and were then scarred for life.

His two childhood best friends, Lacey and Jo, have since parted ways and are no longer friends. Jo Masterson, played by Maddie Hasson, is a social outcast who is still haunted by the past. Lacey Porter, played by Kylie Bunbury, has a high popularity status that she tries to contain.

Throughout the series, Danny tries to earn back the trust of Jo and Lacey. Jo easily forgives him, mostly because she is in love with him. She is also his only friend. Lacey and Danny eventually begin to talk to each other in private, but strong, romantic feelings between the two interrupt their friendship. Lacey hides the relationship so that the news won’t hurt her social status, and Danny does also because it is what Lacey wants.

Things were going well for Danny. He was fitting in and his two best friends were on speaking terms with him. But then Lacey’s best friend, Regina Crane, played by Karynn Moore, is found murdered in her own house after a house party she hosted. Danny instantly becomes the prime suspect.

Danny denies the accusation, but he is in possession of Regina’s necklace, which is the only thing missing from the crime scene. Later, a murder weapon is found with Danny’s fingerprints on it. 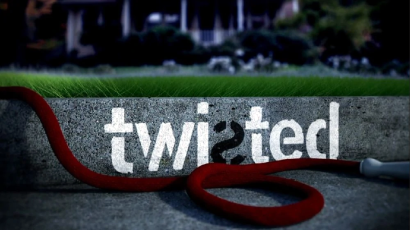 After all the evidence comes to light, Jo and Lacey become skeptical of Danny and question whether he killed Regina.

During this time, Danny’s mother, Karen, played by Denise Richards, seems to be the only person who truly believes that her son did not commit the crime he is being accused of.

Karen used to be very involved in her community and was very social. But after her son was convicted, her status plummeted. She’s gotten to the point where she no longer cares what others think of her. She loves her son and will stand by his side, no matter what.

Danny’s father passed away six months before Danny was released. Danny praised his father and thought nothing less of him. But as the series continues, speculation that Danny’s father may be alive comes to light.

“Twisted” is full of dramatic twists and turns that the audience would have never expected. The changes from drama to romance to mystery keeps the audience on the edge of their seats. The show easily can captivate the viewer’s attention.

One thing I began to notice while watching the series is that Jo seems to become more of the main character than Danny. She has more roles and lines, and the plot somehow begins to revolve around her. It eventually takes the spotlight away from Danny, which makes one question whether the show is about a boy who murdered his aunt or about a girl who is in love with a murderer.

Another thing that disappoints me is that the show only has one season. The show was canceled after ratings crumbled. It went from having more than 1.5 million viewers when it first started to less than 800,000 viewers by the season’s finale.

The fact that the series ended with a huge cliffhanger devastated me and left me with so many unanswered questions. I guess you can say that the rest is up to my imagination.